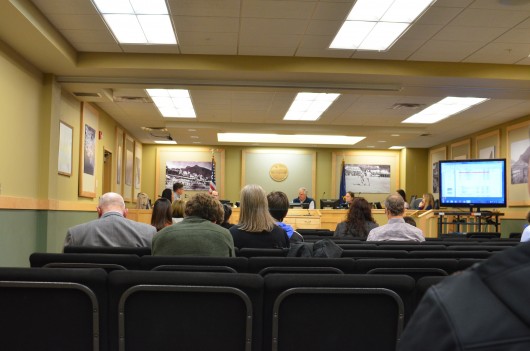 Ketchikan Board of Education meets on February 24, 2015.

The Ketchikan School Board Wednesday night unanimously approved a first reading of a draft budget for fiscal year 2017, but only after a few changes and words from the public.

“We have worked to maintain this for 30 years. This will be our 30th year coming up. So, it began in 1986 and every year since then we have exchanged a teacher with Japan.”

This year’s teacher, Manami Kumazaki, said she has taught Japanese language and culture through games.

“I’m sure, even if they don’t really remember the certain foreign language, like the words , but the experience that they learn a different culture is continuing in their life. Same as me, I’m here because I learned something different when I was a little kid.”

Local parent Lisa Pearson was worried other parents in the district don’t understand the proposed cuts.

“I am concerned passing forward this budget this soon in the process is sending a signal to the Assembly that we as a community have either given up on fighting for these programs or that these programs are not considered important enough to fight for.”

Board Members Trevor Shaw and David Timmerman empathized, but say they don’t have a choice. Board Member Matt Eisenhower agreed.

“Without the borough taking a serious look at funding, our hands are tied.”

However, the Board did make two adjustments.

Members moved technical network supplies up and lowered priority on all activity funds.

At expected funding levels, all after-school activities would end. This was not lost on student representative Cheyenne Matthews who modified her weekly report to reflect what next year may look like.

The Board will bring back the budget for a second reading at its next meeting.

Also Wednesday, the Board unanimously voted to adopt a resolution regarding contracted services. The policy requires contracted service cost be determined by the borough manger and the district superintendent, and jointly ratified by the Assembly and the School Board.

Board President Michelle O’Brien was excused from the meeting, and Glenn Brown participated telephonically.

The Ketchikan School Board meets next on March 9.