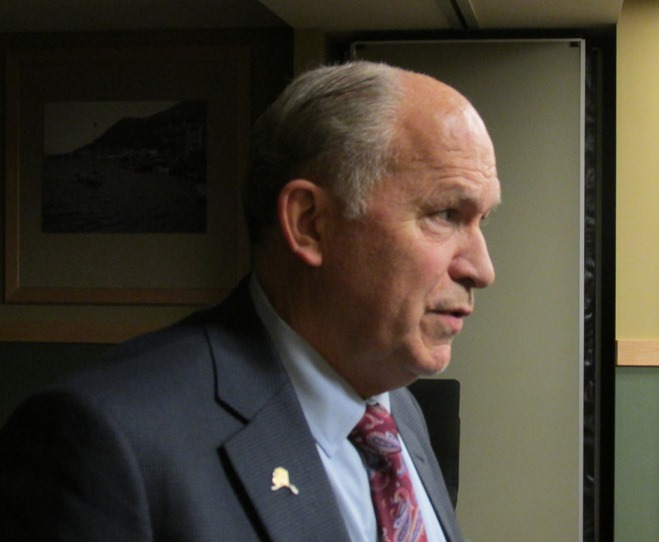 While there’s no firm agreement in place, local and state officials are closer than ever on how to improve Ketchikan’s access to Gravina Island. Gov. Bill Walker was in Ketchikan on Monday to meet with Ketchikan Gateway Borough and City of Ketchikan representatives on that topic. 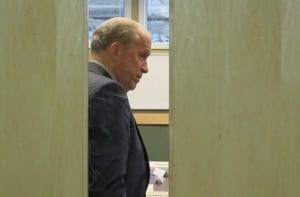 Gov. Walker and local officials met behind closed doors for about an hour, talking about Gravina access. When the meeting was over, Walker told local media that he came here in person to hear directly from the local government.

“We don’t make decisions without all the local input. The fact that I’m here today is a sign of our desire to make a decision collaboratively with the city and borough, and one that they’re very pleased with.”

Borough Manager Dan Bockhorst is optimistic about the direction that the state seems willing to go, although he cautioned that no signed agreements are yet in place.

“Both the governor and (Alaska) Department of Transportation made a commitment to begin immediately in moving forward and we’re already talking about with DOT reps here about when we’re going to meet and finalize the scope of this thing moving forward.”

The scope will involve some kind of improved ferry service. 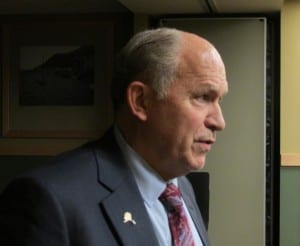 2008 election when then-Gov. Sarah Palin redirected federal funding for Ketchikan’s bridge to Gravina, and made the “Bridge to Nowhere” part of her vice-presidential campaign stump speech.

The original appropriation for the project was $364 million. Of that, all but about $96 million has been spent on transportation projects elsewhere in the state.

State officials in October announced their choice to complete the Gravina Access project. That was the cheapest option identified by the state in its earlier Supplemental Environmental Impact Statement, estimated at $23 million.

Borough officials weren’t pleased with that choice, and came back with their own proposal that would use the entire $96 million left in the project account for Ketchikan.

Airport Manager Mike Carney said the governor and other state officials at the meeting were open to exploring quite a bit of what the borough proposed, which is a change from the October announcement.

“I think a lot of things have been considered from that time to this time and pulled some figures together. The governor has a team, and I think they’ll come down here and in the next couple of weeks, you’ll hear some definite line items. We’ll get started moving.”

Ketchikan’s airport is located on Gravina Island, and is the primary reason cited for improved access.

The borough proposal called for improvements to the ferry terminals on Revilla and Gravina islands to address pedestrian access and safety, including heated waiting areas.

The borough also proposed that the state pay for at least three years of operational costs for shuttle vans purchased by the state. The borough also wants the state to improve existing ferries, and to increase safety, accessibility and passenger capacity. Lastly, the borough proposes that the state extend the Gravina Island road system to provide better access to state, borough and private land.

Carney said the governor was open to all those suggestions, although the road improvements likely would be part of a different project.

Rep. Dan Ortiz helped organize the meeting, and said he’s gratified that the governor made a firm decision about the remaining $96 million of the original project funds.

“The governor’s made a clear commitment that the money is staying here. Right here in Ketchikan. He’s made that commitment.”

So, over the next few weeks or months, the state and borough will explore the costs of some specific items that the borough has asked for, and determine what will happen for the long-awaited Gravina Access project.