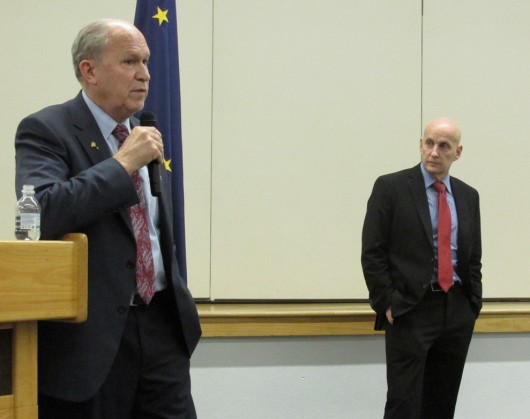 Alaska Gov. Bill Walker presented a short version of his plan to solve the state’s budget deficit, and then heard input on that plan from Ketchikan residents Monday during a town-hall meeting arranged by Rep. Dan Ortiz.

Gov. Walker said his term in office so far has been a little like bungee jumping, and the state has been in a bit of a freefall.

The challenge Walker mentioned is the drastic plunge in the price of oil. The related plunge in oil taxes means a $3.5 billion deficit. That’s an approximate figure; the actual number depends on where the price of oil falls on any given day.

Last year, the state cut a significant amount from the budget. Walker said the previous year’s spending plan was about $8 billion, and lawmakers brought it down to $4.75 billion.

That was a start, but it didn’t solve the problem, so Walker and his administration put together a plan. 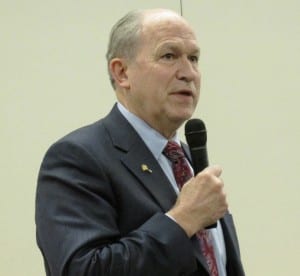 “There’s plenty of things for everybody to not like,” he said. “I don’t like part of the plan.”

That plan calls for increased fuel taxes, for example, along with an income tax and taking a portion of the Alaska Permanent Fund earnings, which would mean a cap on individual Permanent Fund dividends. It also calls for more cuts, but Walker said he wants those cuts to be fair.

Ortiz also addressed the audience, and agrees that there will be more cuts.

“The question though is: How far do we cut before seriously hurting the economy itself,” he said. “What kind of Alaska do we want to have going into the future.”

He stressed the importance of senior services, fisheries and the ferries.

During the public-input part of the meeting, Keith Smith endorsed the proposed income 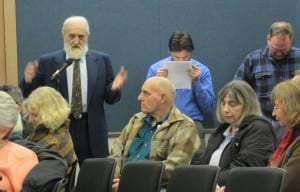 Wally Klingelhut was one of the speakers to provide input during Monday’s town-hall meeting with Gov. Bill Walker. (Photo by Leila Kheiry)

tax, and noted that more cuts could damage the overall economy.

“Government is one of the greatest engines in terms of circulating wealth in a community,” he said. “By us all contributing to a state tax, I think we can move forward and keep Alaska prosperous.”

Two other speakers suggested taking all the Permanent Fund earnings, and eliminating the dividend program for the next few years, until the state’s economy has recovered, rather than implementing an income tax.

Donald Westlund also suggested a source of revenue that hasn’t yet been proposed, at least not in the Legislature.

“Our ferry system, our highway system, is a road tax. We have a toll,” he said. “Nobody else in the state realizes that we have a toll road. I think there should be a toll on every Interior highway.”

Another speaker pointed out that the state’s economic problem is at least partly the result of the reconfigured oil tax system, known as SB21. Walker publicly opposed that bill. However, Alaska voters upheld the measure through a ballot initiative.

Following the town-hall meeting, Gov. Walker sat down briefly with local media. He said he’s had about 50 similar town hall meetings throughout the state.

Going back to the suggestion that the state simply stop giving PFDs, Walker said his administration did look at that option.

“From a numeric standpoint that makes a lot of sense, but what that would do to some folks that rely on that for the cost of energy – the cost differential for where they live – it would be tough,” he said.

In other words, it would affect low-income people more. Walker said he tried to keep things fair in his plan, and he’s not sure about recent proposals from the House that would make deeper cuts to specific programs.

Walker said he’ll have to see what makes it through the legislative process,

“But I was disappointed to see a number of them, certainly public radio. In some areas of Alaska, that’s the only form of communication,” he said. “I remember well on (Alaska Public Radio Network), receiving a call from someone in White Mountain. I know that person in White Mountain, that’s the only method they have of communicating. But it just underscores what a tough situation we’re in.”

Walker said getting out of this tough fiscal situation will require cooperation throughout the state. He told the town-hall audience about a gift he received from Lt. Gov. Byron Mallott: A framed print.

“It was people in a river, pulling on a rope, and I didn’t quite understand it,” he said. “Then I looked at the bottom and it said, in Metlakatla in the early 1900s, when you wanted to pull out stumps, the whole community would show up and with a rope, they’d pull out the stump. And Byron had written at the bottom: ‘Governor, that’s what we’re doing.’ And he’s right: That is what we’re doing. That’s what we need to be doing as a state. We need to do what they did in Metlakatla: We all need to be pulling together.”