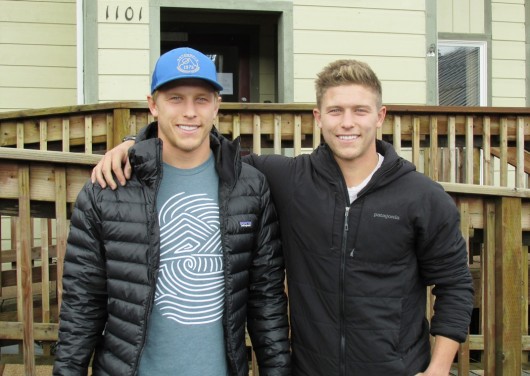 Two brothers from California landed in Ketchikan this week, the starting point of their months-long paddleboard expedition from Alaska to Mexico.

Casey and Ryan Higginbotham came by KRBD to talk about their planned adventure.

“The plan is to drop in right here in Ketchikan, launch out and then paddle all the way down to the border of Mexico in about five months,” said Casey Higginbotham, adding that they’ll camp along the way, and have food drops scheduled every couple hundred miles.  Sounds simple, right?

Well, the twin brothers have been planning this adventure for a long time. They researched the route, the weather, the wildlife; they’ve trained to increase their endurance, and collected the gear needed to complete the trip safely.

Despite all their careful planning, though, this is the first time the two California lifeguards have been north of Washington State. Ryan said they already had to make some adjustments.

“Part of it’s what we’ve heard from people, and part of it was taking the ferry across Dixon Entrance and looking at the seas out there,” he said, laughing.

The primary change was to the planned route, based on advice from area fishermen and tugboat operators, and considering the huge tides in this area, compared to those of southern California.

The brothers know their plans will have to be flexible, because nature doesn’t always cooperate with a schedule.

“I remember right when we started planning, we were thinking ‘Three months, we got it,’”

said Casey. “Then you start planning and you realize you need rest days, we’re gonna get beaten down, now we’re just saying, ‘we’re gonna get there when we get there.’ Half a year, doesn’t matter.”

The two say they wanted an adventure after graduating from college: A real experience in a rugged, pristine part of the world. They’ve been surfing most of their lives, and say they feel at home in the water. So, a paddleboard expedition seemed like the way to go.

They have 18-foot boards made special for this trip, with custom racks to hold their gear: sleeping bags, tent, waterproof maps, a VHF radio, emergency beacons and lots of dehydrated food.

They did plan, though, to get some different gloves while in Ketchikan.

“We put in at the Skeena River the other day down in Prince Rupert and realized: We need thicker gloves,” said Casey.

“My toes were still numb half an hour after we got out, and we were only in the water half an hour,” Ryan said.

The first, roughest part of the route also is the least familiar, which Casey said is part of the appeal.

“That’s the most unnerving thing about it, but exciting, too,” he said. “Just going into the unknown, relatively. You can get as much information as you can, but you don’t really know.”

They agreed they look forward to learning, exploring, discovering and simply experiencing a new part of the natural world. The brothers plan to document the trip as much as possible, and they’re bringing some waterproof cameras and a solar-powered charger.

They hope, while experiencing this big adventure, to also bring awareness to environmental issues affecting the areas they’ll be traveling through.

“If we can have a positive impact on the way down, that makes it that much better,” said Casey.

The adventurous brothers, who will turn 24 during the trip, say they’ve gotten a mix of reactions when they’ve told people about their plans.

“Actually going up the coastline, as we got farther north, people got more and more shaking their heads,” Casey said. “Down in southern California, they were like, ‘yeah, it’s going to be rad. Go for it!’”

“Then you get up here, and this guy in a café somewhere in BC, asked us what was on the roof of our truck,” said Ryan. “We said paddleboards. He said ‘What are you going to do with those, eh?’ I said we’re going to paddle to Mexico, and he just starts laughing.”

Their parents have their own set of concerns.

“Pretty nervous,” said Ryan. “My mom was not too happy about it. But then, we’ve been doing a lot of stuff our whole lives that’s put her on edge.”

Despite their reservations, the twins’ parents did help fund the trip, along with sponsors that donated equipment and gear. The brothers also expect to be broke by the end, but happy.

Another question they often get from people is “are you crazy?”

“There’s a reason no one’s done it before, right?” Casey said.

They said they’ll let me know one way or the other in about six months.