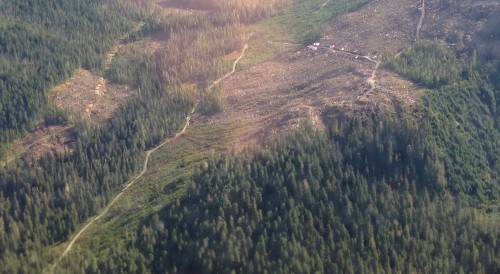 A Tongass National Forest clearcut is shown in this 2014 aerial view. A new court decision limits logging on roadless areas of the forest. (Photo by Ed Schoenfeld/CoastAlaska News)

The U.S. Supreme Court will not take up a case that could have expanded logging in Southeast Alaska’s Tongass National Forest. It’s the final step in one legal battle involving what’s called the Roadless Rule. But there’s another case.

About 15 years ago, the U.S. Forest Service issued a ban on logging, roadbuilding and some other development in many of the wilder lands under its jurisdiction.

Put in place at the end of the Clinton administration, it targeted areas without roads and became known as the Roadless Rule.

A portion of the Tongass National Forest along Peril Strait is seen from the ferry Chenega Sept. 3, 2015. (Photo by Ed Schoenfeld/CoastAlaska News)

It quickly attracted the scrutiny of the first Bush administration, which delayed its implementation. About two years later, that administration announced an exemption for Alaska’s Tongass – and later Chugach – National Forests.

Legal battles ensued and that exemption was upheld, struck down and appealed.

The latest – and final – action in the case came from the U.S. Supreme Court. It decided Monday not to hear a state challenge to a ruling against the exemption by the San Francisco-based 9th Circuit Court of Appeals.

Tom Waldo of the Earthjustice environmental law firm said that means roadless areas of the Tongass are protected.

“It just doesn’t make any sense to keep trying to build expensive new roads that no one can afford to maintain into the wild and remote parts of the Tongass,” he said.

Waldo and other Roadless Rule supporters say it protects salmon and wildlife habitat critical to the region’s tourism and fishing industries.

“What the timber industry needs desperately is a timber supply. And this is one of a number of issues that are preventing us from having that timber supply,” he said.

“Only about 4 percent of all petitions are ever granted review by the Supreme Court. So it’s always something of a long shot,” said Tom Lenhart, a state assistant attorney general involved in the case.

A separate state suit, filed in a District of Columbia court, challenges the whole rule, as well as its Alaska provisions. It claims the rule conflicts with terms of the Alaska National Interest Lands Conservation Act.

“We think very clearly that the Roadless Rule as applied to Alaska violates that federal law, which makes the rule invalid,” he said.

“The Roadless Rule has survived many other legal attacks, like the State of Alaska’s, and we expect the Washington D.C. Circuit [Court] to uphold the Roadless Rule, just like the other courts have,” he said.

Even if that happens, the logging industry could try other approaches.

The forest association’s Graham said lawsuits are just one approach to increasing the amount of timber available for harvest. Another would be to seek congressional action.

“And then the other thing is we could just get a … federal administration that’s friendly toward responsible resource development and they can just rescind the rule, because it’s an administrative rule. It’s nothing that Congress passed,” he said.

Tongass logging is a small fraction of what it was 20 or 30 years ago, when the forest service regularly scheduled large timber sales and mills operated in Sitka, Ketchikan and Wrangell.

In recent years, the forest service has changed its focus from old-growth logging to harvesting younger trees.