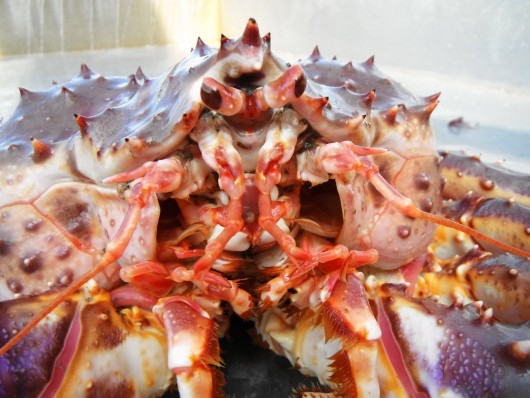 Zombies are real. They’re walking around on the bottom of Alaska’s ocean, mindlessly incubating the next generation of creatures that will, in turn, create even more zombies.

Imagine a king crab, living the good life. He’s minding his own business, happily scavenging the bottom of the ocean for food with his fellow crabs, when all of a sudden he’s attacked and infected. The infection eventually castrates him, and takes over his body.

Now, he’s dedicated to raising the offspring of his attacker.

How does this happen? 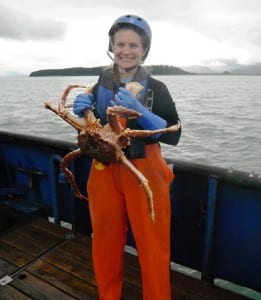 Leah Sloan is a PhD student at the University of Alaska School of Fisheries and Ocean Sciences. Her doctoral research project is zombie king crabs. Well, actually, she’s studying the parasite that creates zombie king crabs. It’s a barnacle, but it’s nothing like the barnacle many of us have seen clinging to the bottom of boats.

In its larval stage, Sloan said, this barnacle goes in search of a crab, and when it finds a suitable host, it injects cells into the crab’s bloodstream.

“These cells divide and form these branching strings – they look kind of like roots – that spread throughout the body of the crab and absorb nutrients,” she said. “This is the adult body of the parasite.”

When it’s ready to reproduce, the parasite creates an egg sac that develops in the same area that a female crab’s eggs normally would go. But, this parasite doesn’t discriminate based on gender – in fact, it quickly makes both genders neutral. 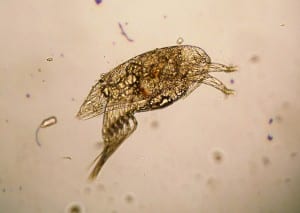 A larvae of the parasitic barnacle. (Photo courtesy Leah Sloan)

“So they’re making parasite larvae instead of crab larvae,” Sloan said. “And the crabs become very good mothers for this parasite egg sac. They will clean it, they will flap their abdomen up in the water column to help the eggs be released better.”

And the male crabs even start to develop characteristics of a female crab.

“So the parasite is really controlling their behavior,” she said. “Their bodies are being taken over and they’re just being used as factories by the parasite to make parasite larvae.”

That leads to another question: How are the crabs controlled by the parasite? Sloan suspects it’s hormonal, but that’s something she hopes will be revealed by the second part of her study.

“I’m doing a study with metabolites, which are small molecules, including hormones, and I’m studying these in both infected crabs and non-infected crabs to hopefully better understand what’s going on – how the parasite is controlling its host, how its body is being changed,” she said.

Sloan said very few people have studied the Alaska king crab parasite; the last research was done back the 1980s. The lack of attention is partly because the prevalence right now is low.

“Less than 1 percent of crabs are infected in Southeast Alaska, and it’s even much, much

smaller up in the Bering Sea,” she said.

So small, in fact, that it was a new topic for Sloan’s advisor, UAF Professor of Marine Biology Sarah Hardy.

“She came into the program already with an interest in this topic,” Hardy said. “It was actually something I didn’t even know about until she introduced me to it.”

So, if it’s not really a problem, why should we care?

Well, first of all, it’s fascinating. But, it also could become a problem in the future. Sloan has learned that the parasite’s larvae develop faster in warmer water, for example – and climate change is leading to warmer oceans.

But on the flip side, reduced salinity creates more die-off among the parasite’s larvae, so it’s also possible that melting glaciers, and the resulting freshwater runoff, could in turn reduce the population.

This is all lab work, though, so it’s hard to say what these findings mean in the wild.

Sloan said the second part of her study also will look at the parasite beyond its larval stage, though, so hopefully more will be revealed soon.

One thing that is known, though, is that if there is a sudden increase in the infestation, it can have a big impact.

Humans might inadvertently be increasing the population of the parasite by throwing back infected crabs. The males crabs that carry the parasite can easily be mistaken for females, and don’t grow as fast, so could be under the legal size to keep. 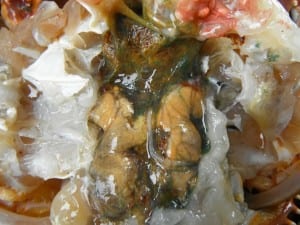 Inside the body cavity of an infected red king crab. The green strings are the parasitic barnacle. (Photo courtesy Leah Sloan)

Right now, Sloan said, the only state fishery that allows fishermen to keep infected crabs, even female or undersized, is the commercial golden king crab fishery in Southeast.

For all the golden king crab customers out there: don’t worry – the parasite won’t turn people into incubating zombie moms for its larvae. Plus, people generally don’t eat the parts where the barnacle hangs out.

“In general, the parasite stays in the body cavity,” Sloan said. “It doesn’t go out in the legs, so the crab’s meat is probably perfectly fine to eat.”

Although, Hardy said, if you do open up that body cavity, you might not want to eat it.

“It looks a little shocking when you see an infected crab,” she said. “Just the legs look fine, but if you were to open the thing up, it wouldn’t look like something you wanted to eat.”

You don’t have to open up the body cavity to see whether a crab is infected, though. Sloan said, just look under the abdominal flap, where the female normally would keep her eggs. 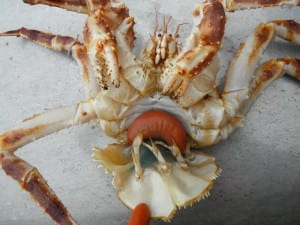 An infected red king crab with an egg sac of the parasitic barnacle.(Photo courtesy Leah Sloan)

“You pull it up and there will be this big crescent-shaped egg sac,” she said. “It’ll be red or peach-colored. And that’s the externa, or egg sac, of the parasite. It looks very different from a crab’s own eggs.”

If the crab already has released the parasite’s larvae, then you’ll instead see a scar that looks a little like a cigarette burn.

Hardy said she’s not the only one who hadn’t heard of the parasitic barnacle before; many state fishery managers also don’t know much about it; at least not yet.

“One thing that I see coming out of Leah’s work is just raising awareness about this issue and trying to get managers to keep an eye out and start to get some quantitative information about how abundant the thing really is” Hardy said.

And knowing more about it is the first step toward protecting Alaska’s king crab population from turning into a bunch of zombies.