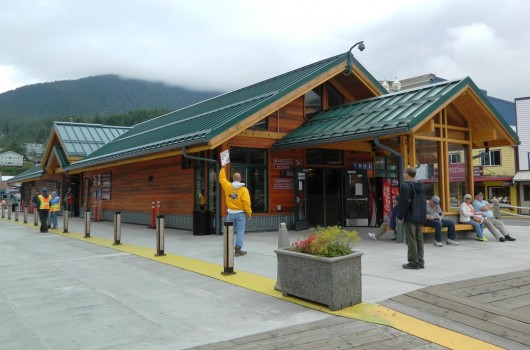 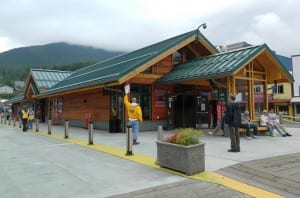 Patti Mackey, president and CEO of Ketchikan Visitors Bureau, gave an update during Wednesday’s Chamber of Commerce lunch on what is happening with the tourism industry locally and across the state; and discussed some of the challenges facing the industry.

Mackey says 2015 was a great year for tourism, with almost 1.8 million visitors coming to Alaska. She says more than 983,000 of those visited Ketchikan and projections indicate there will be about the same number this year.

Most arrive on cruise ships, but Mackey says the number arriving by air went up last year. There were about 944,000 cruise ship visitors in 2015, and about 5,000 more passengers are expected this season.

“We’ve been on a good uphill climb with the cruise industry over the last several years. They have deployed more ships. They’re deploying ships that have a larger capacity. We’ve been seeing some of their newer vessels. This year, Ketchikan will not see this vessel, but the largest ship ever to come to Alaska, The Explorer of the Seas, will be making its way to other ports in the state.”

Mackey says Alaska faces some challenges in remaining a popular cruise destination. She says Alaska used to command 7.5 percent of the global cruise market but that number has decreased to 4.2 percent. Mackey says the cruise industry is shifting toward other locations, such as China and Cuba.

“The moral here is that we shouldn’t take for granted what we have in terms of the industry. In particular in a community like Ketchikan where the benefits to our local businesses, to our municipalities, in terms of revenues that are generated, are such a big part of the overall revenue picture here.”

Mackey says the Ketchikan Visitors Bureau will be working to strengthen its marketing strategy. One area will be attracting journalists and travel writers to Alaska.

“Dollar for dollar, it’s a really good investment. If you sit down with a journalist, if you get them to come to Ketchikan, if there’s a feature story in a magazine that talks about your destination. You can’t buy advertising with that kind of endorsement.”

She says use of social media, a digital campaign and focused advertising in travel magazines are just some of the strategies they are using to attract visitors.

Mackey says state budget cuts will negatively affect marketing. She says this fiscal year, $15 million had been set aside for marketing Alaska. Under the proposed budget, that will be reduced to $3 million next fiscal year. She says there are two things KVB will be considering while dealing with significantly less money.

“Number one, what’s the most efficient use of that money to get the most bang for our buck, and number two, what programs should we continue to offer that include a buy-in from the private sector, so you can increase that money that they’ve been contributing. It’s a big issue.”

Despite challenges, Mackey is optimistic that 2016 will be a good tourism season for the First City. She says the KVB also is working to bring more conventions to town. Mackey says an assessment done by the McDowell Group pointing out strengths and weakness, will help them develop a new convention marketing program.