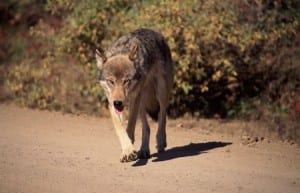 How many wolves are on Prince of Wales Island? It’s an important question because wolves are an important predator – part of the chain of life in the forest. A POW tribal group has been awarded a federal grant to help gather data used to determine that number.

The State of Alaska conducts population studies on Prince of Wales, but  on a relatively small portion of that very large island. State biologists then use data from that study to estimate how many wolves are in the entire game unit, which also includes some outlying islands.

It’s a standard, accepted practice for population studies, but there are obvious limits. To enhance the state’s study, Hydaburg Cooperative Association applied for – and received – a U.S. Fish and Wildlife Service Tribal Wildlife Grant to pay for additional population studies in the area around Hydaburg, in the southwest part of POW.

Tony Christensen runs the natural resources program for the tribe. He said the wolf population study was a priority.

“The wolf brings a balance to the resource and has its place in Southeast and in the state. More importantly is the deer for us,” he said. “If that population of wolves isn’t maintained in a healthy population, then we can have an issue with the deer population in our area.”

Christensen said the Hydaburg study will be modeled on the state’s study, so that results from both can be combined to provide a more complete picture.

He believes the state’s chosen study area limits the accuracy of the data.

“It’s road accessible in areas of high harvest for other resources. With that comes human traffic, and everyone knows wolves, they tend to shy away from where humans are,” he said. “The Hydaburg area is less populated with less roaded area.”

Alaska Fish and Game last year released the findings from its most recent POW wolf population study, and its results were sobering. The study indicated a significant drop in the number of wolves – 89 in the entire game management unit compared to 221 the prior year.

State and federal officials use population estimates to set hunting and trapping limits. So, last season’s wolf hunt on POW was limited to nine animals.

But, Christensen said he thinks there are more wolves than the state study shows.

“We have observations and have a sense that the population is considerably higher than 90 animals, but rather than voice that, we wanted to try to involve ourselves in finding out what the answer is,” he said.

The tribe will work with Fish and Game and local hunters to plan the study. Those plans will take shape over the summer, with most field work happening in the fall.

That primarily involves hair boards: pieces of wood with some barbs on them, scented to attract wolves. The wolves roll on the boards, leaving behind hair samples, and biologists then use the hair to conduct DNA tests. That way, they identify how many individual animals have rolled on the boards, and use that for a population analysis.

Once the samples have been collected, they’ll be sent to the state, and it’ll take…. a while … for the results.

“So, you take the hair and send it off to a lab and they process it and analyze it, and I guess there’s more than just wolves that roll over your scent board, so they have to decipher wolf and other game animals and come back to you with a conclusion,” he said. “I assume it would be next year sometime.

“We’re still waiting on the data from the DNA work from the laboratory work from last fall’s work,” said Ryan Scott, the Southeast Regional Supervisor for the Alaska Department of Fish and Game, confirming that analysis will take a while.

Scott said he’s pleased that Hydaburg is going to provide additional data for the Prince of Wales wolf population study. He said the department hasn’t had the resources to expand the work, although officials have wanted to for a while.

“And cooperatively working with the Hydaburg corporation is a great way to do that,” he said.

Scott said the state’s previous studies are based on best-practices, and it’s accepted among biologists with the understanding that there are limitations. And, in fact, the estimate last fall of 89 wolves was just the midpoint of a range. The state study shows the population could have been as low as 50, or as high as 159.

Increasing the study area will be great, Scott said….

“But again, I would say that the way the department has approached it previous to what we do in the coming year is OK, too,” he said. “It’s the right way to go, given time, money and resources. This certainly will make a much more robust estimate and it’s very appreciated.”

Christensen said he just wants to make sure the wolf hunt is set at a level that ensures the continued viability of deer on Prince of Wales.

The federal grant paying for the Hydaburg portion of the study is just shy of $140,000. It was one of several grants recently awarded by the U.S. Fish and Wildlife Service to tribes in Alaska.