Lt. Gov. Byron Mallott visited Prince of Wales Island and Ketchikan this week. He stopped in at KRBD to talk about his visit to the big island, current issues facing the State of Alaska and his “weird” job.

“You’re responsible for state elections, which is certainly an important responsibility, and you’re on a few boards and commissions,” he said. “But, constitutionally, the principal responsibility of the lieutenant governor is to be available in the event that the governor is incapacitated or otherwise unable to serve. And that’s not a fun thing to do.”

But, Mallott said, in this administration, working with Gov. Bill Walker, he’s able to do a lot more than previous lieutenant governors.

“And I really enjoy this job,” he said. “Since we’ve been in office, going on a year and a half now, I’ve traveled in this state pretty close to 180,000 miles.”

He meets with Alaskans, gives presentations and hears concerns. His active role in the administration is part of the agreement he and Gov. Walker came up with when they decided in 2014 to merge their gubernatorial campaigns.

Among Mallott’s responsibilities is the issue of transboundary mines – those are mines in Canada built near rivers that flow into Alaska. There’s been concern over environmental impacts of mine tailings.

That’s partly why the lieutenant governor went to Prince of Wales Island. He spoke during a symposium focused on that topic. 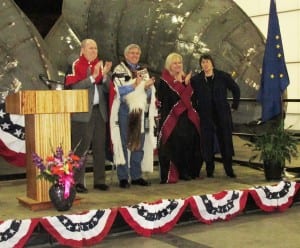 “They are concerned with the Unuk, the Stikine and the Taku. They are anxious that any mineral development in British Columbia not impact our waters or the environmental integrity of those river corridors that flow into Alaska,” he said.

The State of Alaska and British Columbia officials are working on a statement of cooperation regarding those mines. Mallott said he expects to get a draft of that statement from the BC government in the next month.

Mallott also visited various communities on POW, and said he was particularly impressed with some of the sustainable food projects that schools are running in Thorne Bay and Coffman Cove. Students in both of those Southeast Island School District schools help run greenhouse gardens heated by wood-fired boilers.

The Thorne Bay greenhouse provides vegetables to the cafeteria and a school-run restaurant.

“And then in Coffman Cove, they have another greenhouse that has 11,000 plants in it that allows the school district to provide fresh vegetables, mostly green vegetables, throughout the island,” he said.

Among the concerns he heard from POW residents was the issue of timber availability, and the recent announcement that Viking Lumber might close in the next year.

Mallott said the state can only do so much to make its own land available for logging. The problem, he said, is litigation that delays or stops federal timber sales and other projects, such as the Shelter Cove Road.

That’s a state project, but it requires a federal easement that recently was challenged in court by five environmental groups. Mallott said the constant litigation from national groups is “unconscionable,” because it keeps small communities from having a viable economy.

Mallott said salmon are certainly important to the ecology of the entire forest. But, he said, calling the Tongass a salmon forest downplays the impacts policies have on people.

“I love salmon. Salmon is revered by us all,” he said. “I’m a Tlingit Indian. It’s an elemental part of my spirit and who I am as a human being. But when I look to the future of who I am as a Tlingit person, and as a resident of the region and as a citizen of the State of Alaska and even as a citizen of the United States of America, I want to put the face of a human child as a symbol of the Tongass Forest.”

He doesn’t necessarily support a push to transfer parts of the national forest to state control, though. Mallott said unless there’s a huge shift in the way people think in Washington D.C. and throughout the Lower 48, that effort is the equivalent of baying at the moon.

Mallott said the state should work on educating national groups, and working with them to establish policies that work better for everyone.

A big issue on pretty much every Alaskan’s mind these days is the state budget. Mallott said his biggest concern is that the Legislature this year solves the problem of the state’s multi-billion-dollar deficit, brought on by low oil tax revenue.

“To be able to look ourselves and the rest of the world in the eye and to say: We had the opportunity and the resources; it was a critical time in our history. We made the right decisions. We have a fiscal structure in place that allows us to go forward with a balanced budget and we can look to the future,” he said. “Anything else is crippling.”

But, Mallott said, the budget shouldn’t be balanced on the backs of municipal governments.

He doesn’t support phasing out revenue sharing, for example, and said the Legislature needs to find a fair solution to costs associated with the state-mandated Public Employee Retirement System and Teachers Retirement System – commonly called PERS/TRS.

“We as a state rant and rail at unfunded mandates from the federal government. We as a state government, having done that, should be hugely sensitive to not doing that to our own forms of governance, which are local governments across our state,” he said.

Mallott said he and Gov. Walker have been told that they should find a big project that will be their legacy. But, he says, this administration’s goal – and maybe its legacy — is to help Alaskans get through the state’s current financial challenge.