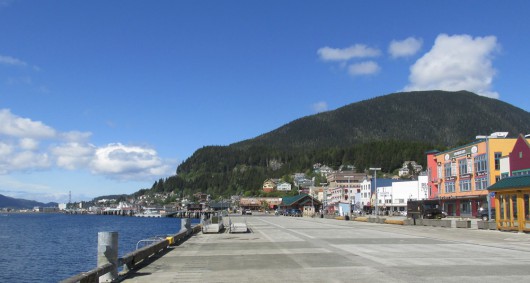 The multi-year renovation to Berths 1 and 2 are pretty ,much done, for the moment. (Photo by Leila Kheiry)

Ketchikan’s cruise season has begun, with about 950,000 visitors expected to arrive in the community’s downtown port over the next few months.

The City of Ketchikan’s Port and Harbors Director Steve Corporon gave an overview of that key community asset during last week’s Chamber of Commerce lunch.

The Port of Ketchikan is the city’s four cruise ship berths, which are pretty important to a community that depends heavily on cruise traffic. Corporon said the port is an enterprise fund – a little company within the City of Ketchikan.

It does well because of the various fees related to serving those nearly one-million visitors every summer. But there are a lot of expenses, too, because the port needs to keep up with changes to the cruise industry.

For example, the two oldest cruise ship berths – Berths 1 and 2 – have been going through a multi-phase, multi-million-dollar, multi-year renovation. The old wooden decking was removed and replaced with concrete several years ago, and this past winter, uplands improvements were completed, although Corporon said the improvements are never really DONE done. 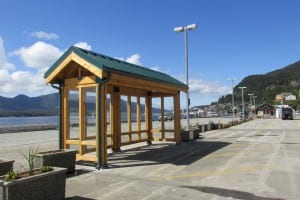 A new bus shelter was part of this winter’s port improvement work. (Photo by Leila Kheiry)

of the rain, a pocket park, historical photos on a screening fence to hide an electrical transformer on Berth 2, and three log benches.

“There used to be, behind Tongass (Trading Co.), before they built Berth 3, a long, square log bench,” he said. “I actually saw a picture of it for the first time yesterday. It was pulled out right before I took over. People said we should have some log benches, so we have three logs that have been turned into benches. They actually turned out really nice. Larry Jackson turned those. Larry Jackson also did all the wood for the bus stop canopies that we put up.”

Corporon said the city also added a gray-water line at Berth 2, in case another ship 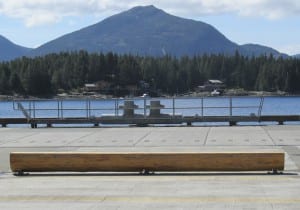 One of three new log benches on Berths 1 and 2 in downtown Ketchikan. (Photo by Leila Kheiry)

gets stuck in Ketchikan like the Celebrity Millennium, which was stranded here for several days in 2013. He said the city also put in new expansion joints on the decking that are less likely to trip pedestrians.

And now that all these improvements on Berths 1 and 2 are pretty much done, the city is starting to plan for another big port improvement project. Corporon said they just hired contractors Moffatt and Nichol to figure out how Ketchikan’s port can start accommodating the really big ships that cruise lines are starting to operate.

“We could tie them up at the docks right now, the problem is, we can’t get all the passengers on and off in a timely fashion, especially if they’re only here for 6.5-7 hours,” he said. “At Berth 3 or Berth 4, they’ll work, but at Berths 1 and 2, we might only be able to get one gangway over, and with a ship of 3,000-4,000 passengers, they’ll be lined up fopr an hour and a half, two hours to get off the ship. By the time they get off, they’ll have an hour or two, then they have to get back in line to get back on the ship.”

Part of the problem is that the ships are built for Caribbean ports, and Caribbean tides – which aren’t as extreme as those in Alaska. The doors passengers use to disembark don’t work well with Ketchikan’s mostly fixed docking facilities.

Floating cruise ship berths off of the existing Berths 1 and 2 likely will be the solution.

“To face those two berths with, whether it be a 50-by-300, or 40-by-300 or 45-by-400, or whatever shakes out to capture the most number of ships as possible (considering) gangway configurations,” he said. “That’s part of the whole process of figuring out what’s going to be our best value.”

Corporon guessed that those floating berths would cost $10 million to $15 million each. The cost likely would be funded through cruise passenger head taxes, which is how the city has paid for port improvements so far.

Corporon also talked to the Chamber audience about the city’s harbors. 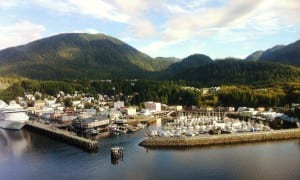 “There’s six small boat harbors. We’ve got four in town: Bar Harbor North and Bar Harbor South, which are right by the harbormaster building; Thomas Basin and City Float, also known as Casey Moran Float downtown behind Berth 3,” he said. “Then way out the road at Knudson Cove, and Hole In The Wall on the other end.”

Unlike the port, the harbors don’t bring in a lot of money. All the city’s harbors were owned by the state, which deferred maintenance year after year until they all needed a complete overhaul.

“The state said, ‘Hmm. We don’t have the money. We’ll give them all to the municipalities.’ And they kind of blackmailed the municipalities into taking them, saying if you don’t take them, we’ll just sell off the floats and leave a hole in the water there,” he said.

The state did provide some money with the harbors, but those funds didn’t cover all of the renovation expense. So, Corporon said, the city looked for grants and issued voter-approved bonds. Harbor-rate increases are paying for those bonds.

There’s still some work to do, but Corporon said the city has slowly rebuilt its harbors, replacing rotting floats and adding ADA-compliant ramps.