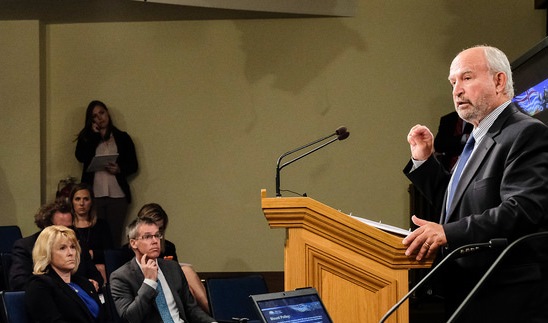 British Columbia Mines and Energy Minister Bill Bennett, at podium, responds to an audit critical of his agency Tuesday in the provincial capital of Victoria. (Photo courtesy B.C. Ministry of Energy and Mines)

British Columbia’s top auditor says the province has failed to protect the environment from mines and mineral exploration projects.

Environmental, fisheries and tribal mining critics in Alaska say the audit backs up their claims.

“There’s just a lack of inspections, a lack of enforcement when they do find issues. And overall, it’s just a complete lack of protections against the possible environmental impacts from these mines,” he said.

He said discharges into rivers that flow through Alaska could threaten salmon stocks and the environment in general.

But in an interview with CBC News, he questioned the conclusion that regulators are influenced by a provincial mine development initiative.

“They’re statutory decision-makers who are independent to make the decisions that they make. Did we have all the resources in place over the last 15 years that we should have? No. The auditor general is correct that there was a period of time when we needed to have more inspectors,” he said.

British Columbia’s opposition New Democratic Party has called on Bennett to resign. He said he has no intention of doing that.

But Archibald points out that Alaska has no regulatory authority over B.C. mines.

“We have to rely on British Columbia identifying, requiring the best practices and then doing the inspections and the monitoring and the enforcement to assure that these companies are adhering to these guidelines,” he said.

The state has had some input into the province’s permitting process. And an agreement negotiated by Bennett and Lt. Gov. Byron Mallott could expand opportunities to comment.

But ultimately, decisions are up to Canadian officials.