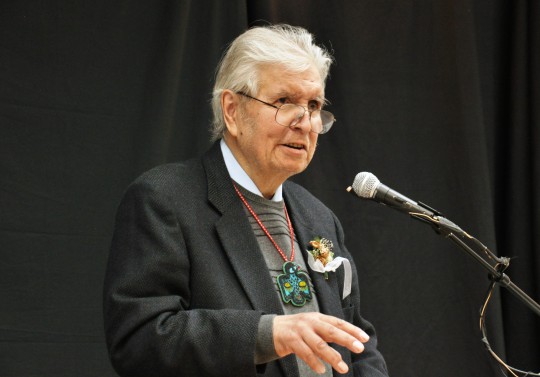 Tlingit leader John Borbridge Jr. died Tuesday. He was a significant player in the campaign for Alaska Native land rights.

Borbridge was a teacher and coach in Juneau and Sitka before being drafted in 1965 to lobby for aboriginal interests in Washington, D.C.

He went on to head up the Alaska Federation of Natives and the Central Council of Tlingit and Haida Indian Tribes of Alaska.

In a 2011 address, Borbridge stressed that the Alaska Native Claims Settlement Act was about much more than creating corporations.

“It is the story of the people who are members of the tribe beginning to understand the extent and nature of their rights and the rights that they have asserted through their predecessors,” he said.

In the late 1950s, Tlingits and Haidas won partial compensation from the federal government for the land they lost when the Tongass National Forest was created.

Tlingit Haida Central Council President Richard Peterson said Borbridge led the charge to include all tribes in the next Congressional battle.

“During the original talks for the Alaska Native Claims Settlement Act, there was a lot of desire from other regions to leave Southeast out because they felt like we’d already been dealt with. … I know he worked to make sure we were included,” he said.

In his address, at the University of Alaska Fairbanks, Borbridge said he knew tribal members needed more than money.

“We wanted land. That was the dream I had for our people. Land. It is cruel to be living in the midst of beautiful land, land that belonged to the Forest Service, belonged to the state of Alaska or territory of Alaska,” he said.

Once the claims act became law, Borbridge chaired the board of directors of Sealaska, the regional Native corporation for Southeast.

“I talked to people who he coached at Sheldon Jackson and at Juneau-Douglas High School and he never raised his voice.  And that’s what happened at the Sealaska board room, too,” said Kookesh, a former state senator.

“He was very persuasive and such a great speaker. When he presented a proposition to the board, it was thorough, it was thought out and he was very articulate,” he said.

Borbridge was also the first full-time president of the Tlingit Haida Central Council, building programs and hiring staff starting in 1967.

“As with any of our elders, you lose that piece of history, that resource you can turn to and talk about why we did what we’ve done and why it’s important to what we do today,” he said.

There’s no word yet about services.