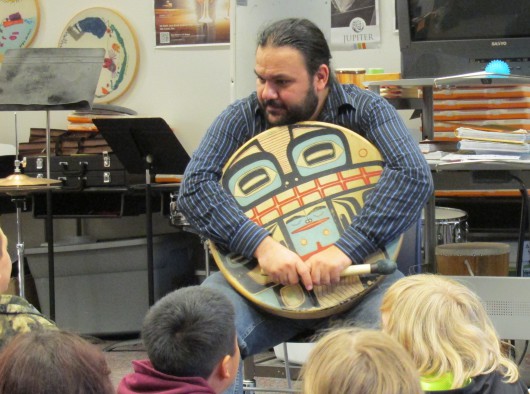 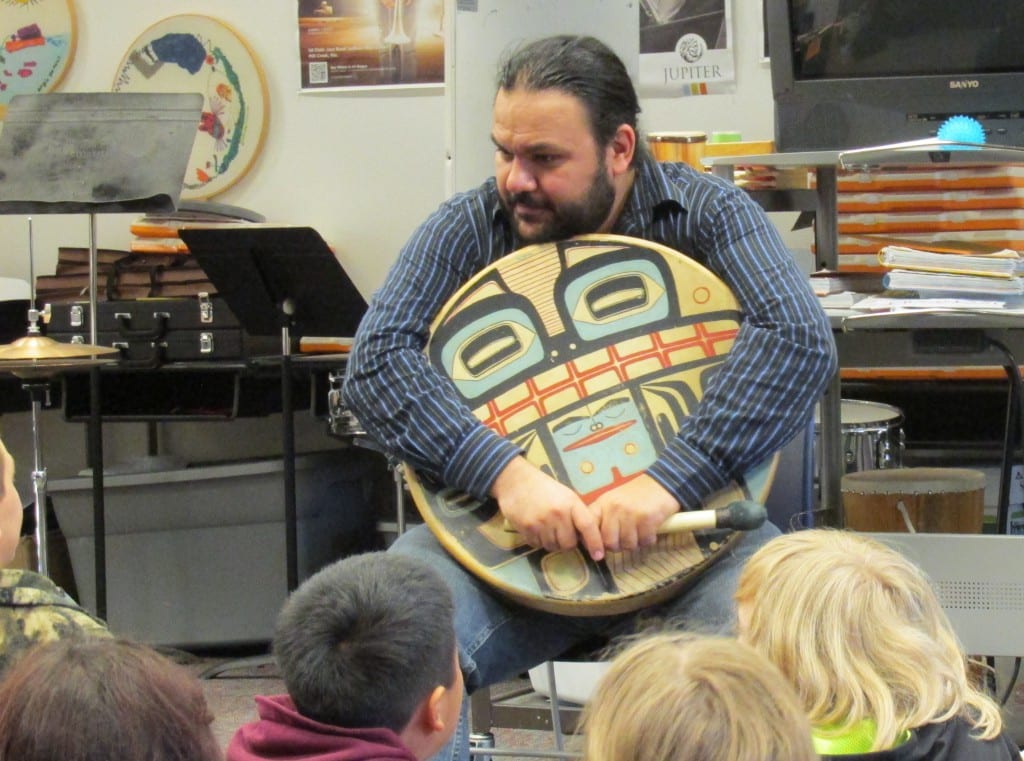 Ed Littlefield listens to a student’s question about the song they’re learning.

Musician Ed Littlefield has been at Fawn Mountain Elementary School the past two weeks (May 9th through 20th) teaching students about Tlingit songs and culture. Littlefield was brought to Ketchikan through the Alaska State Council on the Arts “Artist in Residence” Program.

Ed Littlefield currently lives in Seattle but was born and raised in Sitka. He does freelance music and culture projects, performs with the Native Jazz Quartet, and teaches each summer at the Sitka Fine Arts camp. Littlefield has been working with pre-kindergarten through 6th-graders at Fawn Mountain. He says the goal is to teach the students something about Tlingit culture and music.

“Essentially, what we’re trying to do is to get some of the songs that I know out there into the world. Southeast Alaska is Tlingit Aani, which is the Tlingit’s land. I really think kids in this area should know a little bit about where they live.” 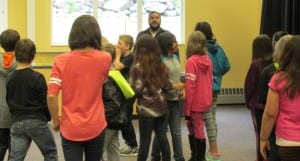 Students practice walking to a drum beat and freezing when the drum stops.

Littlefield says because of the limited teaching time and the complexity of the Tlingit language, simple songs are taught. He says all songs are in the public domain.

“So they’re not owned by any clan, which means that they can actually take them with them. So I teach them who sang the song, what area it’s from, and who I learned it from.”

Fawn Mountain and Point Higgins music teacher Tia Wilhelm says she attended the Basic Arts Institute in Ketchikan two summers ago, and was impressed by Littlefield’s teaching style and energy.“…how he could work positively with people who are musicians and ones who had never held a drum before. They all responded to him in a great way and I thought he would be a good match for Fawn Mountain and, indeed, he is. The kids have been responding really well to him with lots of smiles, and the staff responded really well to the staff training last week and learned some new techniques to use with the kids. It’s been positive all around.”

Littlefield worked with a core group of 5th-graders on skits, songs, language, movement and body percussion.

“Ready. Go. One..two…three…four…five…six…ready…turn. Did we make it all? Let’s clean it up and make it better…”

The 5th-graders prepared for both school and public performances. 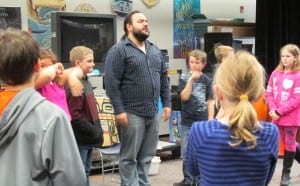 A big part of the classes is teaching students not to talk during activities and to follow directions.

“The beauty of what I do ladies and gentlemen is I would like to teach you stuff, but I’m actually teaching you things about human life and how to be a successful person. So, we’re going to do that again and we’re going to follow the instructions. How much talking do I want? Zero. None. Zilch. Nada. Zippo. Negative zero. I want negative zero talking.”

A group of 4th graders learned the halibut hook song. Littlefield had the students repeat an English translation of the words and then had them sing the song in Tlingit.

He also had the children add motions as if they were fishing for halibut.

Littlefield says he enjoys sharing Tlingit culture and language, as well as music, and hopes students will continue to explore the culture.