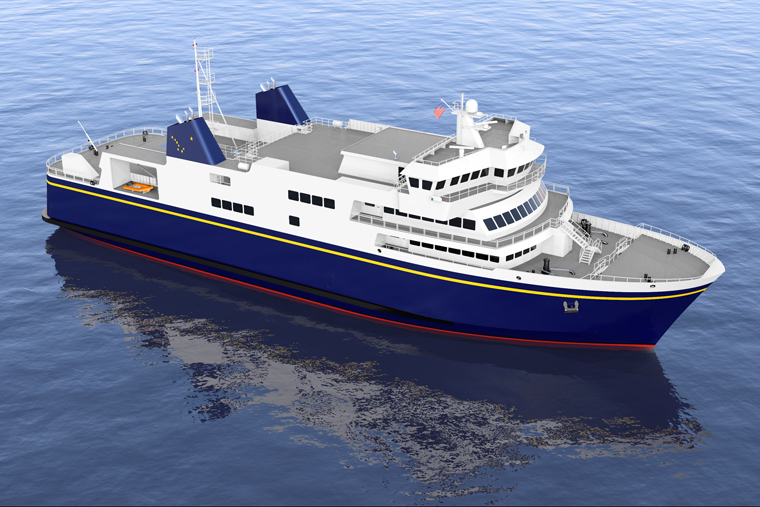 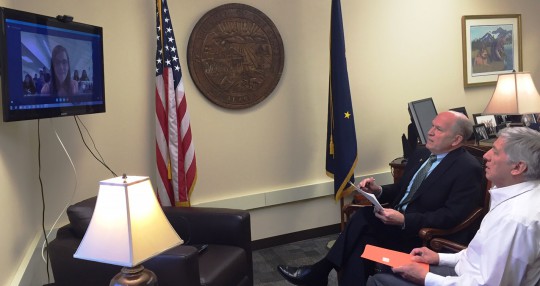 The winners of Alaska’s name-the-new-ferry contest didn’t know about it until they got a call from Gov. Bill Walker and Lt. Gov. Byron Mallott. Then, they learned two news ships will have the names they suggested – the Tazlina and the Hubbard.

Most classrooms don’t get this kind of call, with Gov. Bill Walker and Byron Mallott on a screen via Skype.

“We have an important announcement today that we wanted to share with you. And we’re looking for a young lady named Malea Voran. Is she there?” the governor asked.

She was, at the school in Port Alsworth, on Lake Clark.

Walker told her an essay she wrote about about the Tazlina Glacier was a winner in a statewide competition.

“You did a very nice job, a very nice report. And we have selected you as the recipient of one of the two names for the two ships,” the governor said.

All ferries are named after glaciers. In an interview with KDLG in Dillingham, seventh-grader Voran read part of her essay.

“Imagine stepping out of your car amidst many other parked vehicles. Your heart rapidly beats with excitement. You are on a dock looking at a beautiful ferry in which will be riding from Skagway, all the way to Juneau.  Your anxiety and excitement overwhelms you as you breathlessly whisper, the Tazlina. I will be riding on the Tazlina.” 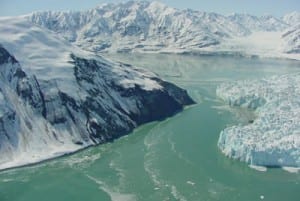 The name means “swift river’ in Ahtna Athabaskan. The glacier is north of Valdez.

The other winner is 10th grader Taylor Thompson of Eagle River, who wrote an essay proposing the name Hubbard. That glacier is near Yakutat, Mallott’s home town. It’s famous for advancing, often rapidly, while most other glaciers are retreating.

She also got a call from the governor. 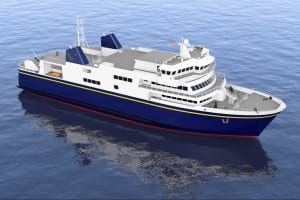 A conceptual drawing shows what the Alaska Class ferries will look like. (Image courtesy state Department of Transportation)

That essay said the glacier, quote, “surpasses all others in its beauty and magnificence. A ferry named after it would surely do the same.”

The governor said he liked the the name because it represents growth, and his administration is trying to grow Alaska’s economy. The lieutenant governor noted the Hubbard is the world’s largest non-polar tidewater glacier, which ties into Alaska’s size.

The two essays were chosen from about 450 submitted by Alaska students.

Ferry system spokesman Jeremy Woodrow was one of the judges. He said it was a hard choice.

“The name was part of the consideration. But you really had to put the best and most well-written essays forward,” he said.

He said one of the more popular names suggested was Margerie, in Glacier Bay National Park and Preserve. The winners’ essays will be framed and placed on the respective ferries.

The two new “Alaska Class” state ferries are under construction at the Vigor Alaska shipyard in Ketchikan. They’re due to be completed in 2018.