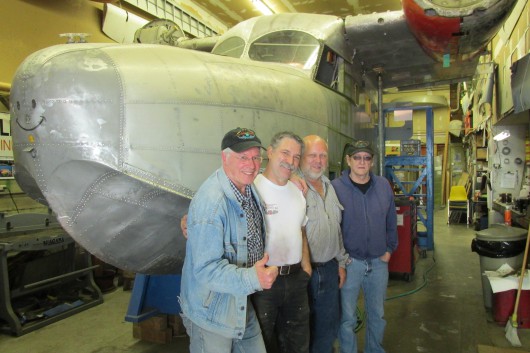 From left to right: Don Dawson, Rick Garner, Arnie Enright and Randy Harris (and the Goose).

The historic Grumman Goose amphibious airplane has strong ties to Ketchikan. Many people arriving in Alaska’s First City in the 1940’s through the early 1970’s flew in on a Goose, operated by Ketchikan-based Ellis Airlines.

For the past 20 years, a group of Ketchikan volunteers has been working to restore one of the Ellis Airlines Grumman Goose planes, in hopes of putting it on display.

The last two decades have been challenging but a labor of love for aviation enthusiast Don Dawson. Dawson says the idea of restoring a Grumman Goose came to him in 1988, when the City of Ketchikan planned to build a new museum adjacent to what is now the Southeast Alaska Discovery Center.  He felt that museum needed a large, dynamic showpiece. 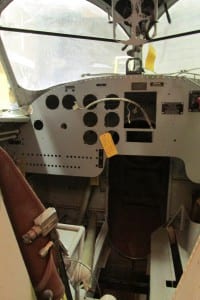 “All museums have dynamics. I’m from Chicago. They have Tyrannosaurus Rex and German U-Boats. So I thought everyone regales the history and the legend of the Grumman Goose, which was the dominant airplane that flew here for three decades-plus. I thought, ‘Wow, everyone loves the Goose so much. It’s the most fondly-remembered plane. How about a Grumman Goose?’”

The non-profit “Save the Goose” project was formed under the umbrella of the Tongass Historical Society. Funding for the new museum fell through after a dip in the economy but, volunteers continued to move forward with the Goose.

Dawson found the first Ellis Airlines Goose – the “Queen of the Fleet” – in Prince Rupert, British Columbia. After the craft was damaged during a landing accident, the owners were willing to sell. Dawson says there was a big celebration when the Goose arrived in Ketchikan, but then came the task of restoring it.

“We had very little as far as resources. No drawings. No parts manuals. Structural repair manuals. No references. So all that had to be gotten right away. And nobody was versed on doing this kind of maintenance on a 1930’s design airplane.” 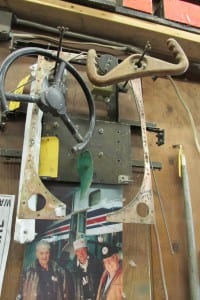 Parts for the cockpit and photo of Ray Chamberlain, Ed Zaugg and Joe Diamond, former Ellis employees who helped with the restoration.

Dawson says more than 100 volunteers have helped with the restoration over the past two decades. Donations have come in the form of time, services, supplies and space.  When the Goose first returned to Ketchikan in 1992, it was stored in an Air Marine hangar owned by the Oaksmith family. Four years later, it was moved to its current location, a former paint shop owned by the Enright family.

Dawson says they knew progress couldn’t be made with an all-volunteer force, so about ten years ago they hired Rick Garner as the mechanic and foreman on the project. Garner says when first approached to do specialized work on the tail section, he thought his involvement would be short term.

“And they had talked to several people and couldn’t find anybody willing to do it or had the expertise to do it. Me and Buck had been friends for years – Bucky, Don Dawson. He approached me on it and asked if I’d be interested to come out and look at it. I looked at it and had no problem. I could do that. Then I did it and thought, ‘That’s it. I’ll go on my merry way and you guys are happy and I’m happy.’ They say, ‘No. We still have things for you to do.’ So they’ve had me trapped here ever since.”

Dawson says the biggest challenge in the restoration process is dealing with corrosion.

To get rid of the corrosion, Dawson says you have to either completely replace the part, put in a patch, or grind the corroded piece and treat it with acid before priming and painting. All are time-consuming. Wherever possible, he says they tried to retain pieces original to the plane.

Dawson says the desire from the start was to put the Goose in a permanent museum display. Though it will never fly, the plane is being restored to airworthy conditions using original drawings from Grumman and modifications done by Ellis Air. The amphibious plane will have gear for both air and water take offs and landings. 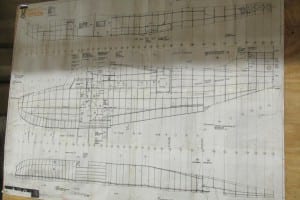 “We’re trying to do this like a time capsule where everything, all the way to the point that when we do the interior – we have the original seats that are going to be reupholstered, we have fabric matches – we want it to be exactly the way it was. That has been very challenging and taken a lot of extra time.”

Dawson says they are working from the tail-end to the front and the project is about 85 percent complete. He says they have all the parts except a matched set of propellers. Dawson says he can’t predict when they will finish, but hopes the restoration will be completed “in the near future.”

The “Save the Goose” project is funded by business and individual donations.

The Goose hangar is at the Enright Industrial Property at Pond Reef Road and North Tongass Highway behind Hal’s Equipment Rental.  It is open to the public every Sunday, except holiday weekends, from 1 to 5 pm. You can learn about volunteering to help restore the Goose by contacting Don Dawson at 617-4001.