Grumman Goose may have found a home 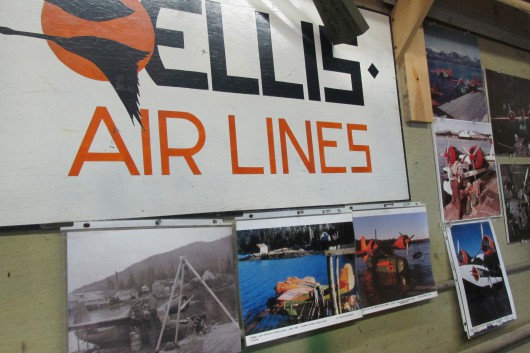 Historic signs and photos on the walls of the Goose hangar.

Since 1992, volunteers with Ketchikan’s “Save the Goose” project have been working to restore a historic amphibious plane.  The Grumman Goose restoration is about 85 percent complete and now those involved are trying to find a permanent home for the plane. They believe they may have found the right place.

From the mid-1940s until 1972, the Grumman Goose was a common site in the sky, and on the water, in Southeast Alaska.  Locally, the amphibious plane could be seen taking off on wheels from the Annette Island airstrip, and landing in the water along Ketchikan’s waterfront. For more than two decades, a group of volunteers has been working to restore a Goose that once was owned by Ketchikan-based Ellis Air.

Don Dawson has led the project since it began. In 1988, the City of Ketchikan planned to build a new museum adjacent to what is now the Southeast Alaska Discovery Center. At that time, Dawson suggested a Grumman Goose as the museum’s showcase piece.  With a downturn in the economy, plans for the museum fell through. While other options for where to display the Goose were considered, Dawson says none worked. He says one suggestion was to display it outside.

“We believe that this thing is so important to Ketchikan’s history as the most significant surviving transport artifact. It deserves a high-profile, prestigious (location). It doesn’t have to be a national-debt project. But it needs to be put on a pedestal. But not outside.”

Dawson says without climate-controlled, museum conditions, the Goose would corrode, defeating the purpose of their restoration efforts 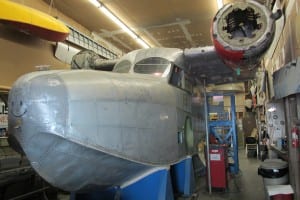 The Grumman Goose “smiles” as it undergoes restoration.

The “Save the Goose” project is a non-profit under the umbrella of the Tongass Historical Society. Dawson says members from both groups have been discussing the idea of installing the Goose in a third-floor addition at Ketchikan International Airport.

“It’s a one-plane, mini-aviation museum. But we could adequately tell the story of commercial and military aviation in this area from day one, and have a really cool artifact, being the first Grumman Goose, as the centerpiece for it.”

Dawson contacted Airport Manager Mike Carney who was supportive of the idea and arranged for a tour of the roof. Dawson says the vision is to have a wrap-around façade of glazed-in UV glass with the front of the Goose facing the runway, to greet arriving passengers.

“Imagine the Goose looking back at you from a third-floor addition. It would wrap on the northwest side which is toward Vallenar, and toward town would be the other side. It would have a wrap.”

Dawson says there would be a wall on one end where historic aviation documents, photos and objects could be displayed, and the Goose would be in the middle of the room. The aviation museum would be accessible by elevator and have its own security outside of TSA. He says it’s a place you could bring guests to or visit while waiting for a flight.

“It would just be a wonderful thing that you could see how grandma, grandpa, mom and dad got around in planes back in the old days. Not just in the Goose but the history of all the other times of all the other planes.  It’s a tribute to the folks, the greatest generation, the pioneers, the people that developed Alaska and made it great. It’s a win-win situation and I think everyone will love it.”

While disappointed when the new museum project fell through in the late 80s, Dawson feels that opened up a better opportunity. He says when members of the Ketchikan Historical Society took the airport roof tour, they could feel the presence of aviators of the past.

“We could feel the old-timers in the great airport in the sky looking down on us going, ‘Now you guys are getting it. And they were all smiling and saying, ‘thumbs up.’”

Dawson says sources of funding for the project could come from airport development funds, the Federal Aviation Administration, corporate donations and philanthropies.  But before the museum can become a reality, the Goose restoration needs to be completed. After 20 years, Dawson says he hopes that will happen, “in the near future.”