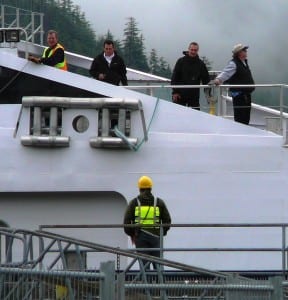 Crew members tie up the fast ferry Fairweather in Sitka. It and other marine highway ships will sail less in the next budget year. (Ed Schoenfeld/CoastAlaska News)

This week’s legislative budget compromise shuffled the source of some of the money that pays for the Alaska Marine Highway System.

But it doesn’t increase — or decrease — the number of routes or sailings.

Ferry spokesman Jeremy Woodrow says the system will stick with its existing summer schedule, as well as a draft version for fall and winter.

The funding shuffle uses more money from the state’s general fund, which pays for the majority of the operating budget.

Before the compromise, the ferry budget took more money from another fund. Woodrow says that’s used as a backup in case of emergencies.

“It’s important to have that buffer there for other items that come up throughout the year. When there’s deferred maintenance costs that are unexpected on vessels, it’s good to be able to dip into that system fund,” he said.

Without that money, the system would have to lay up a broken ship or ask lawmakers for additional money.

Ferry officials say the budget, for the fiscal year beginning in July, will result in a 7 percent reduction in sailings. That’s in addition to cuts the year before.

A public hearing on the fall and winter schedule will be June 22.