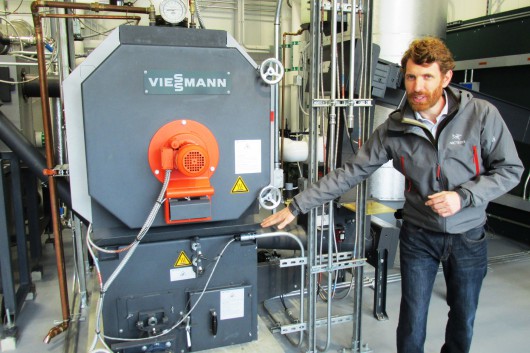 Pretty much everyone attending Ketchikan International Airport’s boiler-room ribbon-cutting on Friday remarked on how clean the space is. The new biomass wood-pellet system also is whisper-quiet, environmentally friendly and, officials say, will save the Ketchikan Gateway Borough money in the long term.

“We’re really excited about this airport biomass heating project, which is why you’re all here. I hope. If not, your plane just left, said Ketchikan Gateway Borough Mayor David Landis, who followed the first rule of speech-making by starting with a joke.

But then he quickly focused on the bottom line:

“This new biomass boiler system replaces a unit that was oil-fired and was 43 years old, and very costly to maintain,” he said. “These heating costs for this unit will be reduced by about 40 percent, we expect.”

And the best part about the project is that it was almost entirely grant funded. With the help of state and federal grants, Landis said the borough’s cost for the nearly $1-million project was about $50,000.

“You could do surgery in here,” joked one attended.

Well, maybe it’s not quite that clean, but the former fish-storage building next to the airport terminal is bright, freshly painted and toasty warm – appropriate for a boiler room.

Unlike other boiler rooms, this one this one needs to remain visually appealing because it’s going to be an ambassador, of sorts. A large window at the front of the building will allow anyone coming through Ketchikan’s airport to see the biomass system, and an informational sign will let the visiting public know what it is, and why it’s important.

So, why is it important?

“We’re just so proud of this project because it’s an example of how you can create a regional economy,” said Devany Plentovich is program manager for biomass and heat recovery with Alaska Energy Authority, which was the primary funder of the airport’s new boiler.

“We have local pellets that are supplying a very high-profile project, with the airport,” she said. “People will be able to see this as they’re traveling through the city. Maybe we can expand biomass even more in the state.”

Bob Deering is the region’s renewable energy coordinator for the U.S. Forest Service, which also helped get the airport project going. He said Ketchikan is a leader statewide in biomass.

Deering also notes that wood fuel is considered environmentally clean. The pellets, provided by Ketchikan-based Tongass Forest Enterprises, are made from wood waste. Deering said wood is a plentiful, carbon-neutral heat source, and the ash created from burning pellets could be used in a garden. And, he said, spilling this fuel isn’t a big deal.

“I’ve spent a lot of my career cleaning up fuel spills. It’s expensive,” he said. “If you guys have a fuel spill here, you’re going to use a dustpan to clean up your fuel spill.”

The airport project is the first of two biomass conversions that the Ketchikan Gateway Borough started working on a few years ago. The other one will be at Ketchikan High School.

Plentovich said that project has been recommended for Alaska Energy Authority grant funding, but – considering the state budget crunch – the money isn’t there right now.

“But it is a very, very solid project and we need to figure out how we can get it to move forward,” she said.

And when it does happen, you can be sure there will be a ribbon to cut.