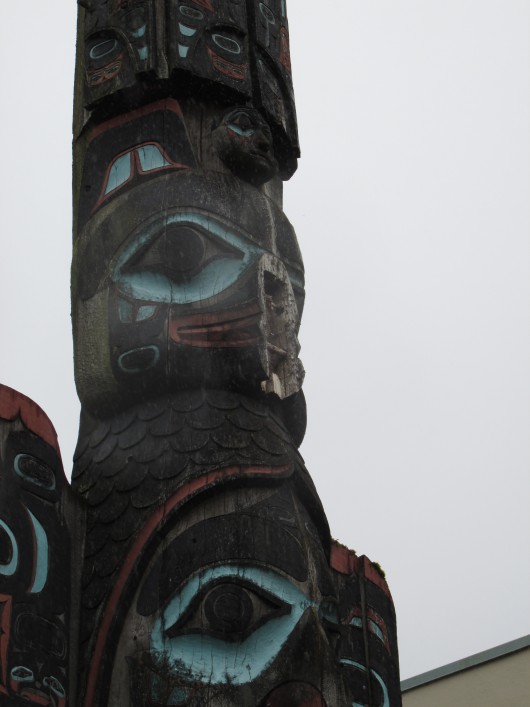 Detail of the Chief Johnson pole where the beak fell off.

Vancouver, British Columbia, based Conservator Andrew Todd is in Ketchikan this week to assess the condition of the Chief Johnson Totem Pole. The 55 foot replica was carved by Tlingit carver Israel Shotridge and raised in 1989 at the south end of the Centennial Building parking lot.  Todd was brought up after the beak of the raven figure fell off in early April.

Todd began assessing the pole on Tuesday. He explains what he’s looking for.

“Safety hazards – pieces that might come loose and fall off and cause damage. That’s pretty well the highest form of priority. After that, cosmetic issues with paint, which protects the wood. And any other wood deterioration that’s going to lead to further problems.”

The pole was carved from a single red cedar log with several attached pieces. The raven’s beak is one of those attachments. Todd says it likely fell off due to age and weather.

“The beak probably got filled with water, and the weight pulled it away from the pole itself. And it was weathered. Some of the connecting pieces in the wood of the pole itself were starting to deteriorate to the point where it didn’t hold it when the heavy rains came.” 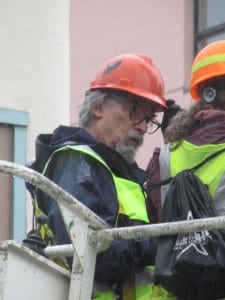 From his initial assessment, Todd identified some issues that should be addressed.

“Loose carving details need to be reattached and need fill. The paint is a bit deteriorated. Just to spruce it up, some of that work needs to be done.”

Todd also plans penetration tests to determine whether the pole is structurally strong. He says it will take about a week to complete his analysis and prepare a report for the Ketchikan Museum Department.

This post has been updated to correct an error.