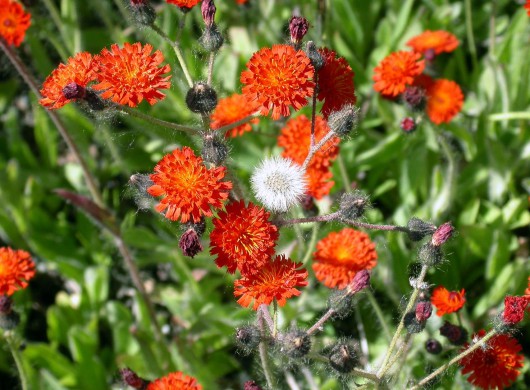 A group formed in May is trying to tackle the problem of invasive plants in the Ketchikan area. The Cooperative Weed Management Area partnership group hosted a presentation earlier this month to raise awareness of the issue and provide tips on how to identify and eradicate weeds threatening native plants.

Gino Graziano is an invasive plants instructor at the University of Alaska Fairbanks Cooperative Extension Service. He spoke, via internet, about problem plant species in Southeast and methods for reducing their impact. Graziano says there are several different types of weeds and exotic plants. The discussion focused on common invasive plants in Southeast that threaten native species.

“Invasives are these exotic plants, things that were introduced, that have the potential to establish and spread in natural areas, and actually cause harm to resources, the economy or the environment. The key part to that definition is it has to cause harm.”

Invasive plants can be introduced to an area in many ways. They can be carried in shipping crates, on vehicle tires or people’s shoes, with agricultural products and by other means.

Graziano says invasive plants have three unique characteristics. They escape natural enemies, they have a different life cycle from native plants allowing them to take hold when other plants are perhaps dormant, and they have adapted to live with other invasive organisms. Graziano says earthworms were mostly eliminated from North America during the last ice age, and are actually an invasive organism. 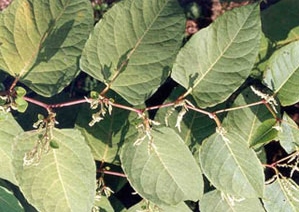 “And there is some suspicion that maybe in parts of North America where earthworms were not native, that they might be actually changing the soil in ways that are favoring some plants over others.”

Graziano spoke about some of the most common and problematic invasive plants in the Ketchikan area. One of those is tansy ragwort.

He says tansy ragwort can spread by its roots and seeds, and the seeds are easily carried by the wind. Graziano says it can be controlled by pulling and digging, but care needs to be taken not to spread seeds.

Another common invasive is Japanese knotweed.

“It’s kind of a bamboo-like perennial plant. It has really aggressive creeping rhizomes. Stems too. It can spread with its stems. Anywhere there is a node, a little bend in the branch where there’s a swelling. Those nodes can reroot and form a new plant.”

Graziano says Japanese knotweed grows so dense that little else is able to grow. He says it will spread if mowed or plowed, and is best controlled with herbicides. 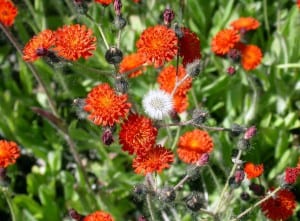 Orange hawkweed is also common and aggressive, and spreads by roots and seeds.

“It doesn’t actually require sexual reproduction to produce viable seed. This plant is able to get to a new spot, it can be the only plant there, and it’ll start spreading with it roots but at the same time make seed without pollination. It’s able to make that next jump to a new, long-distance dispersal from one seed, one new plant.”

Graziano says orange hawkweed is difficult to remove because its shallow, fibrous roots break off easily, spreading the plant further. He says if there are more than about three or four plants in an area, pulling and digging is ineffective, and you need to dig a large hole to remove all roots. He says herbicides can be effective but, because the plant has hairy leaves, a surfactant should be used.

“A surfactant is an additive that you put into the herbicide. It’s usually like an oil or soap-based thing. What that does is break the surface tension of the water. If you don’t break the surface tension of the water, the water droplets will stick to the hairs and they won’t get to the leaf. If they don’t get to the leaf, they’re not absorbed by the plant.”

Other invasives discussed include scotch broom, which can prevent reforestation; English ivy, that out-shades trees; and Himalayan blackberry which grows in impenetrable thickets that prevent native plants from getting established.

Graziano says if you don’t want to download the app you can still report invasives. He says it’s important to take good photographs and provide accurate location information.

Graziano says you shouldn’t pull plants unless you’re sure what they are, and won’t accidentally spread it when trying to remove it. He says you also should make sure you’re not trespassing on private land. Graziano says there are many invasive species that have not reached Southeast yet, but could be brought in. He encourages people to help locate invasives and report them to the Cooperative Extension Service.

Field Guides to plants and animals in Alaska (native and invasive):  http://accs.uaa.alaska.edu/field-guides