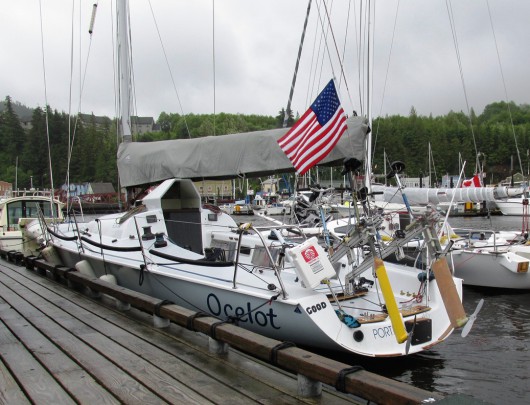 The coveted second-place prize of steak knives has been claimed in this year’s second annual Race to Alaska.

The eight members of Team Jungle Kitty arrived late Thursday – just before midnight — in their 44-foot mono-hull sailboat, tricked out with two tandem bicycles on the back to provide paddle power in case of low wind power.

They were soon followed by Team Big Broderna, which arrived around 3:30 this morning; Team Madrona at about 5 a.m.; Team Mail Order Bride at 5:41; Team Pure and Wild at 7:34; and Team Un-Cruise Adventures at 11 a.m.

As of Friday afternoon, Team Turn Point Design appears to be the next boat that will arrive at the finish line at Thomas Basin Boat Harbor.

The 750-mile Race to Alaska started last Thursday at Port Townsend, Wash., with a qualifying run to Victoria, B.C. Teams that chose to continue restarted from Victoria at noon on Sunday.

Two teams have Ketchikan residents on board. Team Salish Express, with local Mack Dahl joining forces with a Port Townsend crew, has passed the checkpoint at Bella Bella; and Team Ketchikan, with all locals on board, is about to pass Vancouver Island.

A public reception to celebrate the teams that have arrived starts at 3 p.m. Saturday at The Fish House.