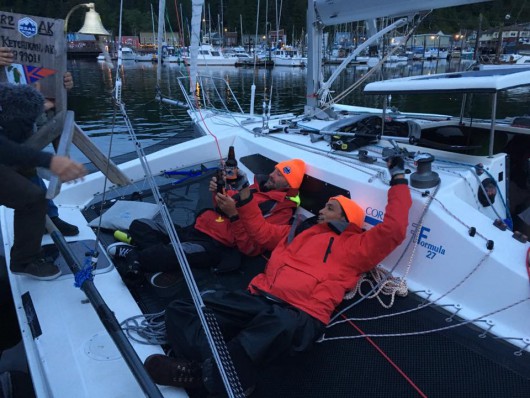 Team Alula arrived in Ketchikan this week. They were officially disqualified, but still finished the 750-mile Race to Alaska. (R2AK photo)

Team Alula is the most celebrated disqualified team to finish the Race to Alaska – a 750-mile engineless boat race up the coast from Port Townsend, Wash., to Ketchikan. They arrived in Alaska’s First City this week — nearly three weeks after the race began.

The original Team Alula was three athletes who also happened to be paraplegic. About four days into the race, one team member had to drop out, and that almost led to them scratching.

But then, other Race to Alaska sailors — who had already finished the long trip up the coast, rang the bell, accepted congratulations, celebrated, etc. — offered to get back on the water and join Team Alula to help them finish the course.

But, that broke the rules. You can’t add team members after the race has started, so Alula was officially disqualified.

That didn’t stop any race fans in Ketchikan from watching their progress, sending good thoughts down the coast, and finally cheering with gusto as Team Alula rounded the breakwater at Thomas Basin and crossed the finish line.

Ketchikan resident Hunter Davis is a big Race to Alaska fan. He has greeted every single boat to arrive in this year’s race – even those that got here at 3 a.m.

So, we gave him a recorder, and a quick tutorial on how to use it. He caught the moment when original Alula crew member Zach Tapac spotted his family members on the dock.

“Team Alula had some supporters they did not know were going to be here,” said Davis, as supporters and family members laughed and cheered.

After Team Alula tied up, fans demanded that they ring the traditional finish-line bell.

And then, a Champagne bottle appeared, and the cork popped for a true celebration.

Among the group on the dock were members of Team Excellent Adventure, which arrived just ahead of Alula.

Alula Team Captain Spike Kane spotted them in the crowd.

“Get over here, you scurvy dogs! Hiding behind the crowd. We’ve been chasing you,” he yelled.

“We got in around 2 o’clock,” one member of Team Excellent Adventure said. “We were rowing hard to keep the lead. You were a great motivation for us.”

You heard correctly. He said rowed. While some of the teams – those that finished quickly – had great wind from Port Townsend to Ketchikan, many of the other teams experienced dead calm for long periods, and had to rely on rowing or paddling to maintain their forward momentum – or even to just not drift backwards.

“And we rowed into the US border from Canada. We didn’t sail, we rowed.”

That was Mark Eastham, from Team Ain’t Brain Surgery. He’s one of the sailors who joined Alula later in the race. Alula’s Zach Tapac says Eastham and Morgan Tedrow from Team Mail Order Bride made all the difference in Alula’s successful finish.

“The spirit of the race is: We’re all racing against each other, but we’re all on the same team. So, to help someone finish the race – I don’t know if that opportunity has ever come up in the race for someone to jump in and change crews, but more than one person stepped up and this is it: The finish.”

Finishing that kind of adventure is sweet, indeed, especially with a little help from your friends.

There are still some boats making their way to Ketchikan. You can track their progress online.

Thanks to Hunter Davis for his help with this report.