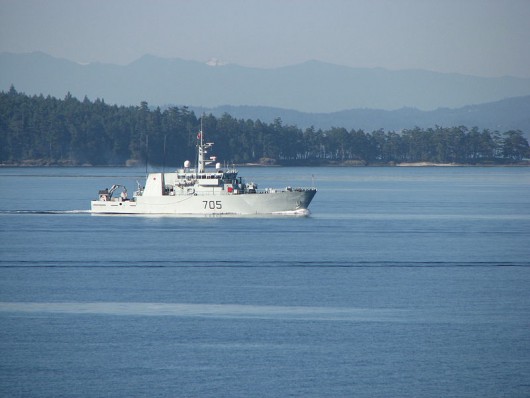 The Canadian Navy landed in Ketchikan Friday. It’s not an invasion, though; the HMCS Whitehorse is in Alaska’s First City on a goodwill visit, and will open the ship for public tours on Sunday.

A big, white, obviously military ship is tied up at the Ketchikan shipyard, but it’s not there for drydock work.

Her Majesty’s Canadian Ship Whitehorse is just here for a visit, and to welcome visitors on board. CO Shane Denneny welcomed us, and showed us around the ship.

“We’re what we call a maritime coastal defense vessel,” he said. “There are 12 of us in the Royal Canadian Navy, split evenly between both coasts, between Halifax and … Victoria.”

The approximately 180-foot Whitehorse was commissioned in 1998, and Denneny said it was designed for a variety of tasks, from mine-sweeping and rescue, to counter-narcotics.

For that last task, in particular, the ship has some firepower. 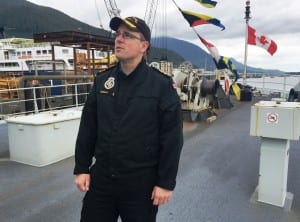 Whitehorse CO Shane Denneny on the deck of the Canadian Navy ship. (Photo by Leila Kheiry)

“Two 50-caliber machine guns, which is sort of the main armament for the vessel right now, which works fine for the constabulary role that it’s usually employed in when its doing the counter-narcotics mission off Central America,” he said. “Obviously, there’s no real need for them at home. One would hope not.”

A counter-narcotics mission was a big part of the ship’s activities over last fall and winter. It was a collaborative effort with other countries’ militaries, including the U.S.

And on that mission, “We were credited with either interdictions or disruptions of approximately 9,800 kilograms of cocaine. Two of our other sister ships have just participated. They came back about two months ago, and they had comparable success.”

Denneny said that ships smuggling drugs vary in size. Some carry up to 500-1,000 kilos of drugs. Self-propelled semi-submersible boats can carry up to 7,000 kilos, but Denneny hasn’t seen one of those yet.

“If you get to interdict an SPSS, you’re really lucky because they’re really hard to find,” he said. “They’re out there, but they’re hard to track and hard to find. It’s usually by gosh or by golly that you come across one of those.”

Denneny said collaboration, like that used in the counter-narcotics missions, has become an integral part of international military operations.

“I think as you see the security environment in the world continue to evolve, collaboration is the way forward,” he said. “I don’t think anybody has the skills, the capability, the breadth to manage the circumstances all on their own.”

In addition to welcoming the public on board while in Ketchikan, the crew will have some shore leave.

Denneny said the crew is a blend of part-time reservists and active-duty members.

“It’s a good group of people: People from all across Canada from Newfoundland to British Columbia,” he said. “A good 25-30 percent of the crew is female. So, a good mix of Canadians from coast to coast.”

The Whitehorse has a current crew of 45, and can carry up to 47.

The Whitehorse and its crew will be in Ketchikan through Monday. Public tours of the vessel are Sunday between 1 and 4 p.m. at the Vigor Alaska shipyard.