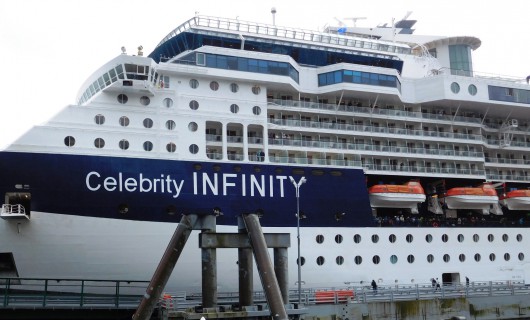 The Ketchikan City Council will hear an update Thursday on repairs to the downtown cruise ship dock’s Berth 3, which was damaged on June 3rd when the cruise ship Infinity slammed into the dock.

A representative of design firm Moffatt & Nichol will present the update to the Council. In a memo summarizing the 200-page repair report, the Anchorage-based firm noted that while the damage was significant, contractor Turnagain Marine Construction completed the bulk of the repair work in less than a month, allowing the berth to re-open to cruise traffic by June 29th.

Ketchikan’s four cruise ship berths are extremely busy during the summer tourist season, with about a million cruise passengers coming through the city between May and September.

While most of the repairs are done, there are still some items remaining that will be completed later. They include some fenders that had to be ordered and will take a couple of months to ship.

Also Thursday, the Council will consider hiring Nicholas Kepler of Sitka as the new Streets Division Supervisor, with an annual salary of about $70,000, plus benefits; and hiring Jeremy Bynum of Portland, Ore., as the new electric systems manager/engineer at Ketchikan Public Utilities Electric Division.

The electrical systems manager position has been vacant since fall of 2014. If approved by the Council, Bynum’s annual salary would be about $108,000, plus benefits.