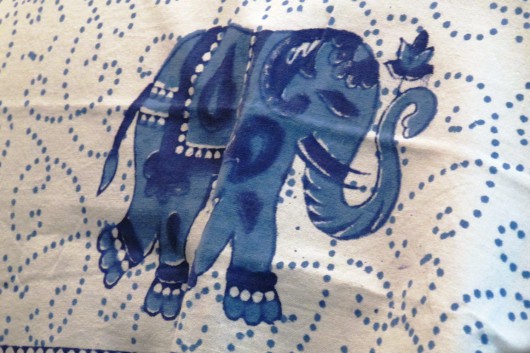 Block printing on fabric was one of the cottage industries in India that a local Rotary group visited. (Photo by Leila Kheiry)

A group of Ketchikan Rotary members traveled to India in February to help administer polio vaccines, and to see the sights that country has to offer.

Diane Gubatayao and Mary Kowalczyk were among the Rotarians who took the trip. They gave a presentation about that experience to a recent Ketchikan Chamber of Commerce lunch.

The group went to Chandigairh, in India’s northern region, for the country’s National Immunization Day. Gubatayao said they actually have four immunization days each year in that country of 1.2 billion people, and the event in Chandigairh took more than one day. 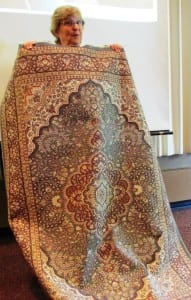 Diane Gubatayao holds up a handwoven rug that she bought during a trip to India with a local Rotary group. (Photo by Leila Kheiry)

The first day, public health officials set up tables and immunized children brought to the event by their parents. The next day was a door-to-door campaign to find kids who weren’t able to come to the event. Gubatayao said that’s harder than you might think, because of the population density in that city. So, health officials just write on the walls.

“This is a really cool system. How do you know if the kids have been immunized in the house? They use a chalk system that tells the date they were there, whether or not they’ve successfully immunized all the children inside,” she said.

They also visited a tiger reserve, bird sanctuary, and various temples and palaces, including the famous Taj Mahal, which Gubatayao said is everything it’s cracked up to be.

The Taj Mahal was commissioned in the 1600s by the Emperor Shah Jahan in memory of his wife, who died in childbirth.

The Chamber presentation was just a small taste of what the Rotarians experienced in India. Kowalczyk said the group is planning a larger presentation this fall.