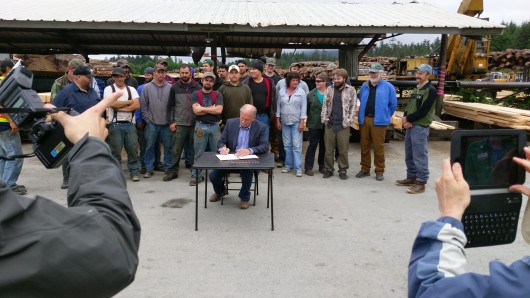 Gov. Bill Walker has signed legislation he said will provide more timber for Alaska’s mills. But it probably won’t be that much of an increase.

Its owners have said they’ll have to shut down next year if they can’t harvest more timber, a claim challenged by the Forest Service and some environmental groups.

At the signing ceremony, Viking’s Kurt Dahlstrom said the bill will help.

“What it allows is the state to negotiate large timber sales with customers that want to saw the lumber,” he said. “So this bill’s good for us because in the future we may be able to pick up a very big sale from the state that will last us a year or two.”

The governor signed the measure July 19 in front of about 25 mill workers.

He said it’s part of a larger administration effort.

“To me it’s all about jobs, it’s all about economy,” Walker said. “So I will be extremely aggressive, I have been, on everything I can do to make sure this young man has plenty of timber opportunities to make this mill an ongoing generation of successes.”

Walker and others say the bill will help the state replace Tongass timber, which has been less available in recent years.

But Regional Forester Beth Pendleton, in an earlier interview, said Viking is logging one substantial timber sale and can bid on others so it has enough logs to stay open.

The bill removes some limits on state sales.

Division of Forestry Director Chris Maisch said that allows his staff to negotiate terms guaranteeing more logs go to mills, rather than export.

“It allows us to consistently use this authority anywhere statewide,” Maisch said. “So it really doesn’t change the length of time or the amount that could be sold.”

The legislation is not without critics.

Many environmental groups have called for an end to logging, to preserve fisheries habitat and allow the forest to store more carbon, slowing climate change.

Southeast Alaska Conservation Council attorney Buck Lindekugel said it’s unfortunate the bill focuses on the Klawock mill. He said SEACC’s examination of Forest Service records shows it’s been shipping too much of what it logs overseas.

“We think there’s a little irony involved here where the state is going to be spending more money at a time of fiscal distress to make state timber available to Viking Lumber when the records show that Viking has been exporting nearly 55 million board feet of timber cut from the Tongass over the past six years,” he said.

“So some of the wood could find its way into the export market,” Maisch  said. “But that will help the mill because they’re getting a big return for those logs. They’ll saw the ones that they can make money on and still will make money on any logs that are not sawn there.”

He said the way the bill changes negotiated-sales rules will reduce the amount exported.

“It’s really tough to predict how this is going to make a difference,” he said.  “But we know it costs the state a lot of money to offer these timber sales. So, it’s no free lunch.”

Maisch said the rule change will actually save the state time and money. But he said it will reduce revenues, since fewer logs will be going overseas.

Here’s a link to an earlier story about Viking: