P2P finalist wants to open a space for art 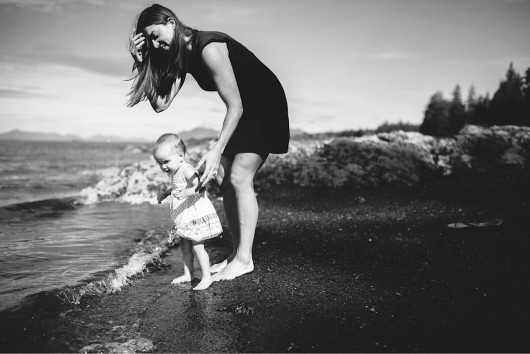 Laura Kinunen and her daughter on the beach. (Photo by Lindsey Bolling)

Path to Prosperity finalist Laura Kinunen has been thinking about and planning her business for years. The Ketchikan resident hopes that the Southeast-based small-business competition will help move The Artist Workshop from concept to reality.

The Artist Workshop is a place for people to take classes taught by local artists; purchase art supplies; rent space to work on art; and exhibit their artwork.

As the name suggests; it’s a place for artists. It’s also just an idea right now.

But, Laura Kinunen said she’s patronized similar businesses in Juneau and Portland, and thinks it’s an idea that will work in Ketchikan. Because who wouldn’t want to take a class from – for example — local artist Halli Kenoyer, well known for creating all kinds of stuff out of, well, all kinds of stuff.

“The way she puts things together is just so cool,” Kinunen said. “And to be able to sit in front of her and watch her while she says, ‘This is what we’re going to make today!’ And everybody has a pile of stuff sitting in front of them and they get to put it all together to create their own, whatever it happens to be.”

To be clear, Kinunen hasn’t talked to any artists about teaching workshops yet; she just really likes Halli Kenoyer’s work.

The vision is mini-classes, where people go for a couple of hours, have fun, socialize and come out with a finished thing – artwork, craft item, etc. The Ketchikan Area Arts and Humanities Council has been offering some classes along those lines, and they’ve been popular.

Kinunen said that shows there’s a desire for such activities here, and her business would expand the concept even more. She said it’s a four-tier business idea. The first three are the workshops, art supplies and exhibit area – all in one large space.

“In my head it’s very cool, by the way,” she said, laughing.

“The fourth (tier) is that it’s a depot for people to drop off old supplies, boxes of whatever they find in their basement; businesses or organizations can drop off junk, basically, that can be recycled and turned into art.”

Kinunen’s business then would either resell the items at a low cost, or give them away to artists and teachers, or use them for art workshops. She said it’s a way to keep potentially useful stuff in rotation.

This idea of a space for artists has been in Kinunen’s head for about a decade. She wasn’t sure how to move it forward, but then she heard about the Path to Prosperity program. That was a year ago, and Kinunen wasn’t quite ready to take on a new project then – she was a relatively new mom at that point.

Then this winter, she said, “I was thinking about what am I going to do with my life? Am I going to go back to work? And I’ve been thinking a lot about this idea, and here’s my opportunity. I have time. I don’t have money. And here’s someone who is willing to give me an education – or the support, anyway, that I need – and possibly get some money for this. And, wow, what a cool opportunity!”

So, Kinunen filled out the application.

As one of the 12 Path to Prosperity finalists, Kinunen will attend a business boot camp in Juneau this fall. Before that happens, she said she’ll get at least a first draft of a business plan written. That way, the plan can be refined through the boot camp process.

When their plans are done, all the finalists turn them in to the competition. And early next year, two winners will be announced, each receiving $40,000.

Winning would be great, of course, but Kinunen said just becoming a finalist has been a big boost.

“Whether I win and get the 40-grand or not, I’m that much further along,” she said. “I wouldn’t have probably pushed myself to do it on my own.”

So, in the end, she’ll have her business plan, a financial model, maybe some seed money, and a good idea that is much closer to becoming reality.

The annual Path to Prosperity competition is a partnership between the Haa Aani Community Development Fund and The Nature Conservancy.