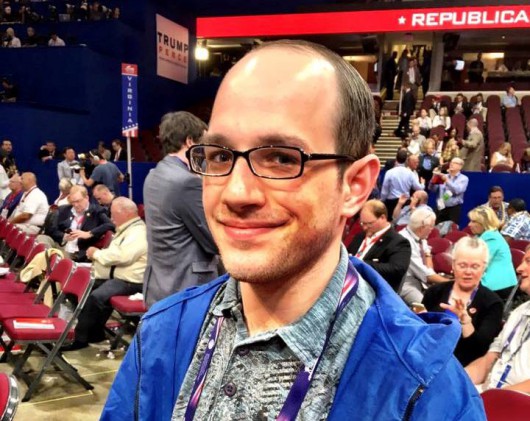 Trevor Shaw at the Republican National Convention in Cleveland. (Photo by Liz Ruskin/APRN)

District 36 Republican Chairman Trevor Shaw was one of 28 Alaska delegates to the Republican National Convention. Shaw spoke to KRBD recently about his experience at the convention, and opinion of Republican presidential nominee Donald Trump.

The Ketchikan resident was one of two Southeast Republican delates to the convention. The other is former District 36 Representative Peggy Wilson of Wrangell.  Shaw says he arrived in Cleveland, Ohio, a few days early and met with other members of the Alaska delegation. He says he was impressed with the host city.

“Cleveland was really a great host. Everybody was really friendly. The city was very clean. It was well prepared. Very hospitable.  It was good to be able to spend some of that extra time exploring Cleveland.”

Shaw says more than 50,000 people attended, and the room was filled with energy. He says being at the convention is a very different experience than watching it on TV, and much more entertaining.

“When you’re able to be there and be a part of the experience, it’s a lot more invigorating. You’re a lot more actively involved instead of sometimes, maybe, just passively participating.”

He says he met former Republican presidential candidate Dr. Ben Carson at the convention, and spoke with him for about 20 minutes. Shaw says about 5 minutes of their discussion was spent on politics and the rest, talking about Alaska.

“It was funny because he said one of his big regrets was not to be able to come up here during the campaign, and that he would really like to be able to come up on his own.  Of course I invited him up and said we’d love to have him come to Ketchikan. Mitt Romney came and went fishing on Prince of Wales Island a couple years back. Ben Carson recalled that and he said, ‘Well I might have to come up and come fishing.” That would be interesting. That would be exciting.”

Shaw says he met a number of current and former senators and governors, and also interacted with other young Republicans, discussing their experiences and goals for the party.

“Something that’s so exciting about that is everyone that’s there kind of shares the same fundamental, foundational, political beliefs that you have. Being able to talk to those people, understand where they’re coming from, talk about the various walks of life that they’ve gone through and why they are a Republican, and why they’re involved and want to be involved at the national level. It was a really exciting experience and making those connections was the best part of the whole thing.”

Shaw says he strongly supported Marco Rubio, and went to the convention as a Trump sceptic. He says he met a lot of people who knew Donald Trump personally, and talking to them made him change his mind.

“The big thing that a lot of them told me is, ‘How do you gauge a lot of people?’ Well, by how their kids turned out and how their children were raised. Being able to talk to them, talk about their experience knowing Donald Trump personally as a friend or a colleague was kind of enlightening to me, and kind of eased my concerns that I had for supporting Donald Trump.”

Shaw feels the election comes down to ideology and who the president will bring to the administration.  He says he believes Hillary Clinton is a flawed candidate.

In the last presidential election, Shaw, now 21, wasn’t old enough to vote. He says being part of the process of electing a major party nominee was exciting, and he’s looking forward to voting in this year’s presidential race.