A proposal to establish a boroughwide retail marijuana tax was indefinitely postponed Monday following lengthy discussion and several attempts to amend the ordinance.

The proposed ordinance called for a 5 percent excise tax on all retail marijuana sales.

“Are we trying to dissuade people from using a product we don’t like, kind of like we did with tobacco?” he said. “We probably should make it a very high tax. If we want to raise a whole lot of money and put it in the general fund or someother fund, we should make it a high tax. So, we need to ask ourselves: ‘What’s the purpose behind any of this taxation at this point in time?’”

Thompson then proposed a 10-percent marijuana excise tax as an amendment.

Assembly Member John Harrington, participating via telephone, spoke against the amendment, which he said would complicate what should be a simple motion.

“We can adjust it later, we can talk about it later, but the … motions on the table are just

meant to kill the whole thing,” he said.

Thompson’s amendment failed in a 3-3 tie vote, with Thompson and Assembly Members Stephen Bradford and Mike Painter voting in favor.

Assembly Member Bill Rotecki was absent, as was Mayor David Landis. Otherwise, Landis would have been able to break the tie.

Assembly Member Bradford then offered an amendment that would have included alcohol sales in the excise tax. He said he doesn’t believe in singling out a product for taxation.

“I think we’re just trying to impose some people’s moral judgments and some people’s opposition to a product, and make it as difficult as possible to sell that product in spite of the affirmative vote of the people to do so,” he said.

Because the borough has linked alcoholic beverage retail licenses with marijuana licenses in its regulatory rules, Bradford argued, the borough should tax them equally.

There was discussion about whether that was legal. Borough Attorney Scott Brandt-Erichsen said that state law prohibits local alcohol taxes unless other items are similarly taxed – a general sales tax, for example.

He said he’d have to do some research to determine whether linking alcohol and marijuana together was enough to make it legal.

“But I could tell the Assembly, without researching it further, that if it is not in violation of that section, it is certainly pushing the envelope,” he said.

Then Thompson proposed adding an additional tax for concentrated marijuana products, based on the level of THC – the active ingredient in pot.  That also failed, this time in a 2-4 vote with Thompson and Assembly Member Mike Painter voting yes.

A fourth amendment, also proposed by Thompson, called for putting the issue in front of voters this October. That amendment passed 4-2, with Harrington and Assembly Member Alan Bailey voting no.

And then, finally, Harrington proposed indefinitely postponing the issue. He cited the complex debate, and all the attempts to amend the ordinance.

“I think it’s pretty obvious we’re not going to get anywhere,” he said. “We’re going to keep fighting about this. The thought of having something simple moving forward is dying the death of a thousand cuts.”

The motion to indefinitely postpone passed 4-2, with Painter and Wong voting no. The issue can still be brought back at a later time. 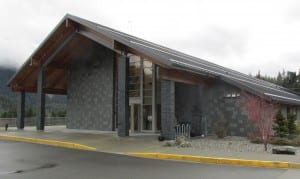 The Assembly also voted 3-3 on a motion to pay the City of Ketchikan approximately $400,000 for borough residents’ use of the public library. That tie vote means the motion failed.

Harrington, Thompson and Painter voted against what has been an annual payment, collected through the borough’s non-areawide library tax. Painter argued that residents outside of city limits don’t have a say in how the library operates, so they shouldn’t have to pay for it.

When the motion failed, though, Harrington asked that it be reconsidered and brought back when a full Assembly can consider it. The library issue will return for the Assembly’s Sept. 6 meeting. 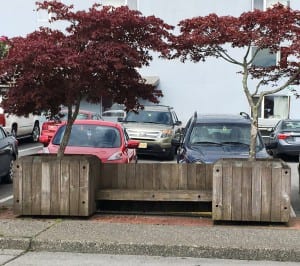 One of the wooden benches along Dock Street in front of the Centennial Building in downtown Ketchikan. (Photo by Leila Kheiry)

Assembly members also agreed to leave the Centennial Building benches in place for the moment, and talk further with City of Ketchikan officials about a solution to the issue of homeless and/or inebriated people using the benches inappropriately.

One suggestion was to install armrests, although there also was talk of removing the benches temporarily while a permanent solution is discussed. Wong advocated for armrests as an easier option.

“I would think it would be a lot more economically savvy to just get wrought-iron armrests and bolt (them) into the wooden benches and make it really uncomfortable to sleep on, instead of taking (them) out to put back in, or put something else in that’s far more costly,” he said.

Some local businesses have complained about inappropriate use of the benches, but other local residents contacted the borough to advocate for keeping the benches in place.

The Assembly agreed to put the issue on the agenda for the next city-borough cooperative relations committee meeting, set for Sept. 9.