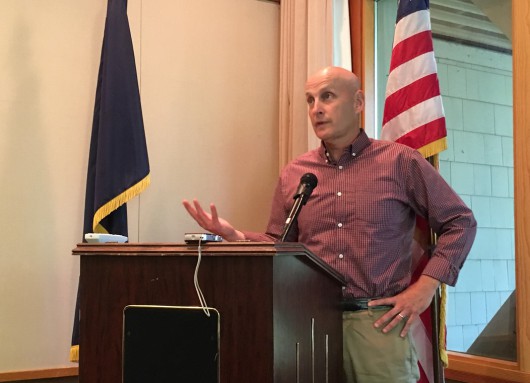 House District 36 Rep. Dan Ortiz said the Alaska Legislature “fumbled” by not approving new sources of revenue before closing the most recent session.

Ortiz, who is running for re-election against challengers Bob Sivertsen, a Republican, and Kenneth Shaw of the Constitution Party, spoke Wednesday during the Ketchikan Chamber of Commerce lunch.

Ortiz started his comments with a roundup of accomplishments as the district representative for the past two years. He said it’s valid for constituents to ask whether he delivered the goods.

“I’ll be honest with you, it’s tough. There’s not a lot of goods that can be delivered from the state level, particularly when you talk about our capital budget,” he said. “But that said, there are still some dollars out there and the question is how did Ketchikan do? How did District 36 do in these last two years? I think we did pretty darned well in terms of protecting potential severe cuts to different areas of our economic infrastructure.”

Ortiz said he worked in support of Senate Bill 32, which reduces restrictions on state-owned land to allow more timber harvest; and worked with the governor’s office to get some movement on the Gravina Access plan, and secure remaining funds in that account for Ketchikan projects.

Ortiz said he also used his vote as leverage to restore funding for areas of the budget that had been cut. The Legislature needed to dip into the state’s Constitutional Budget Reserve to cover the budget deficit, and doing that requires a three-fourths majority rather than a simple majority.

Ortiz said that while he disagrees with relying solely on the CBR to cover the deficit, he was

willing to vote for it to make sure money was put back for cruise passenger fee revenue sharing, the Alaska Marine Highway System and Pioneers Homes.

But, Ortiz said, he’s disappointed with the Legislature’s lack of action on revenue.

“Throughout this whole session, we had lots and lots and lots of opportunity to address the issues and to come up with some tough votes in favor of creating some revenue,” he said. “But in the end, we didn’t do it. We fumbled. We just didn’t have the political will to make the tough votes.”

Ortiz supports capping individual Permanent Fund Dividend payments at, for example, $1,000 per person, and using any leftover earnings to help pay for government. He said the majority of legislators across party lines didn’t want to do it, though, because it wasn’t politically wise in an election year.

“Hey, I like my Permanent Fund Dividend as much as the rest of you, but the reality is, because we’re funding this fiscal budget crisis right now with savings, those savings are going to go away,” he said. “If we don’t do something significant here in the near future, and frankly we struck out this last year, the whole dividend program itself will go away.”

Following his presentation, an audience member asked Ortiz what he thinks will happen in the next session, which starts in early January. Ortiz said that results from Tuesday’s primary election indicate that Republicans could lose some seats, so there might be a bi-partisan coalition leading the House. He said that could lead to a better working relationship with the governor, who is non-affiliated.

Ortiz also is not affiliated with a party. He caucused with Democrats during the last session.