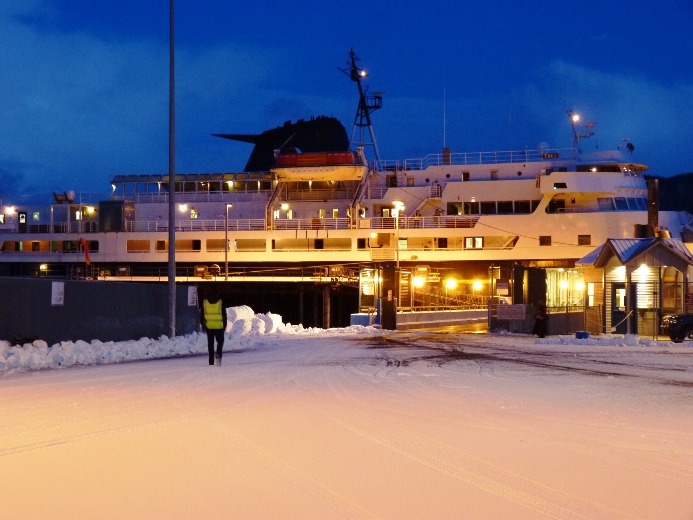 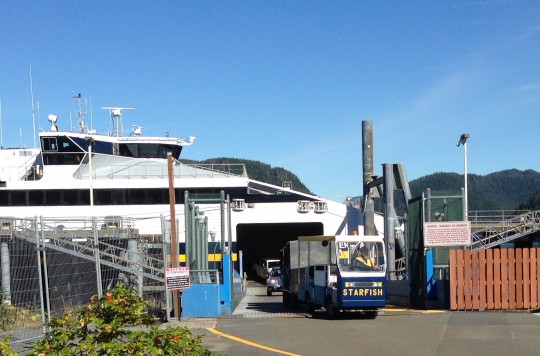 A baggage cart leaves the Chenega in Sitka Sept. 3, 2015. The fast ferry is tied up for the rest of this fiscal year, but other ships will boost the winter schedule. (Ed Schoenfeld/CoastAlaska News)

The schedule, released Aug. 17, shows a 6 percent increase in sailings. That’s the difference between last season’s 166 weeks and this season’s 176.

Ferry system spokesman Jeremy Woodrow says one fewer ship will be down for major repairs at a key time of year.

“Last year, the Columbia went in for a major capital improvement project where it was out for the entire winter schedule. And this year the Columbia will be providing service through October and the first half of November, as well as the second half of April this year,” he said. 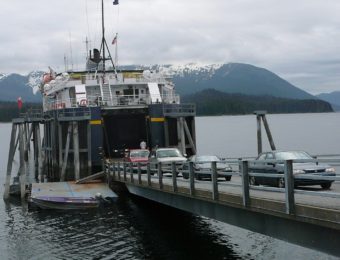 Drivers leave the ferry Fairweather at the Angoon terminal in 2010. Angoon will have more service this winter. (Photo by Ed Schoenfeld/CoastAlaska News)

A draft schedule, released in May, called for more cuts. Overhauls of several ships would have eliminated service to Tenakee Springs, Gustavus and Angoon for more than a month.

“They were able to reschedule those overhaul periods and still provide service to Prince William Sound and those communities of northern Southeast Alaska without having a service gap this winter. By doing so, we moved around the overhaul periods for the LeConte, Aurora and Fairweather and each one of those vessels will kind of be filling in for the other when they going to their overhauls this year,” he said.

The schedule also shows no shutdown of Skagway service for part of the winter. That’s because planned repairs to the northern Southeast community’s ferry dock have been pushed back.

But it’s not all good. Woodrow says work on the ferry Matanuska will cancel some southern Southeast sailings.

“That is going into its overhaul in January to the beginning of February this next year. And that will create a service gap to Prince Rupert during that time,” Woodrow said.

Overall, service for the fiscal year is less than in the previous year, with more ships laid up. That’s due to an approximately 10 percent budget cut tied to declining state revenues.