The Ketchikan Pioneer Home is one of six in Alaska caring for older residents. Budget cuts mean empty beds will not be filled anytime soon. (Photo by KRBD)

Alaska’s Pioneer Homes have stopped accepting new residents, at least for a while. It’s one more impact of state budget cuts.

The state’s six homes usually serve about 440-450 Alaskans at any given time.

“They are beds that we are not filling because we don’t have adequate staff to be able to ensure good, safe care,” she said.

Wilson’s agency has lost 30 positions, mostly because of attrition. And since senior care is labor-intensive, fewer people can be housed. 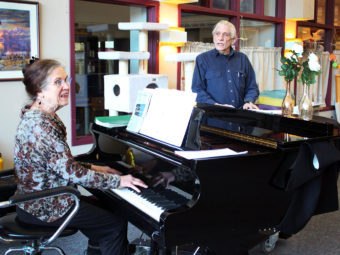 That means the homes, three in Southeast and three in the Railbelt, can no longer accept new residents in the highest category of care. It’s called Level 3, and it’s pretty much like a nursing home, with 24-hour, hands-on assistance.

“Right at the moment, it’s all six of them. No one’s taking any of the level 3s right at this point,” she said.

More than half of all residents, and a large number of applicants, are in that category. Two lower levels, different types of assisted-living care, require less staffing.

Wilson said seniors seeking such care might have a chance to get a bed. But, probably not right away.

“We would look carefully at their level of care and see if we could manage them with the staff that we have,” she said.

“This is devastating,” said Ann Secrest, communications director for the Alaska branch of AARP, a nationwide senior advocacy group.

She said Alaskans are living longer and staying at home as late as they can. But there comes a time when more care is required. So pioneer home cuts remove a much-needed option.

“We have the fastest growing senior population in the nation, by percentage. There’s nothing much we can do about that,” she said.

She said it’s no surprise pioneer homes are facing cutbacks. But she objects to those who say reductions don’t have to affect services.

“Some people call it the low-hanging fruit. I don’t. We’ve already cut all of that off. We’re now into the mid-level branches,” she said.

The state considered turning the homes over to the private sector to save money. But it’s dropped that idea, though services such as pharmacies could still be privatized.

That could allow more new residents in. But Wilson said that’s only if funding remains the same.

“Being a realist, as we take cuts, we will continue to have to consider that more beds will have to be cut,” she said.

Even in better times, it’s hard to get into a pioneer home. As of mid-summer, close to 600 people were on the active waiting list.

The inactive list, those waiting until they’re in greater need, is much larger.