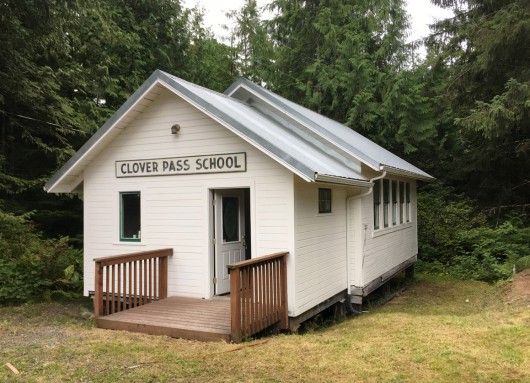 The historic one-room Clover Pass School has been restored, and will be transferred to the Potter Road Association on Sept. 10. (Photo by Leila Kheiry)

Two Ketchikan non-profit groups have been working together for years to save a historic one-room schoolhouse. The project is pretty much complete, and the groups have planned an event to celebrate the restoration of Clover Pass School.

In Sept. 2, 1947, the one-room Clover Pass School opened on Potter Road on the north end of Ketchikan’s road system. It continued operating as a school until around 1960. It later was used as a neighborhood library, and as a polling place.

“And then it just sat. For years,” said Shawn McAllister, president of the Potter Road Association — one of two groups that worked together to restore Clover Pass School. 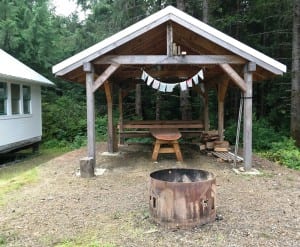 The Potter Road Association built this picnic shelter next to the historic Clover Pass School, with plans to use the site as a community gathering place. (Photo by Leila Kheiry)

The other organization is Historic Ketchikan, which – for the moment – owns the building. Terry Wanzer is president of the board, and said it was about a dozen years ago that Historic Ketchikan decided to take on the project.

“It needed everything,” he said. “The foundation was about ready to topple into the muskeg, so we put all new piling foundation underneath it. It needed to be rewired. We had to gut the entire building, put in all new sheetrock, insulation, windows, and flooring and doors. Basically, it needed everything.”

But there are some parts of the original building they were able to save.

“The siding is all original, the sign is original. The door inside is original to the school. So, it looks just like the day it was built,” Wanzer said.

Wanzer said Clover Pass School is listed on the National Historic Register; and the building may well be significant beyond Ketchikan.

“It’s probably one of the few, if not the only, remaining one-room school houses left in the state, in Alaska — at least in Southeast,” he said. 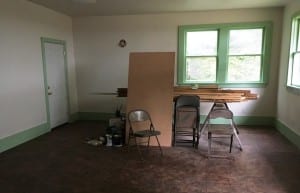 Inside the main room of Clover Pass School. (Photo by Leila Kheiry)

It is a cool building, too, built with wood from an old cannery. You walk in the main door, and there’s a small cloakroom to the left just before the main room, which is empty now, except for stacks of metal chairs and a table with building supplies stacked on top.

But, it’s easy to imagine about a dozen kids, sitting at their desks on a dark, rainy, winter day. Oil lanterns lit the room, the students hauled water from a nearby creek to wash their hands, and their restroom was an outhouse behind the school.

The outhouse wasn’t replaced, but McAllister said all the neighbors along Potter Road contributed to restoring the main Clover Pass School building.

“It’s been just a great little community project,” he said. “Having (the) Southeast Exposure gang across the road with a bathroom that we can borrow, and power when we needed it – before there was power over here. And then Larry Jackson with his sawmill, and Snapper (Carson) cut the beams for underneath. It’s been fun.”

McAllister said at first, a group of Potter Road neighbors worked informally with Historic Ketchikan. Later, they decided to form the association.

“And got a license to use the land. And then we built the picnic shelter,” he said. “We’ve just been using it for community potlucks, little gatherings, birthday parties.”

Now that the bulk of the restoration is complete, Historic Ketchikan is ready to transfer the project over to the association, so it can continue to be a community gathering space for years to come.

Historic Ketchikan will formally hand the keys to Clover Pass School to the Potter Road Association during a potluck party at the site. The public event is set for 5 p.m. Sept. 10th.

This story has been edited to correct an error.