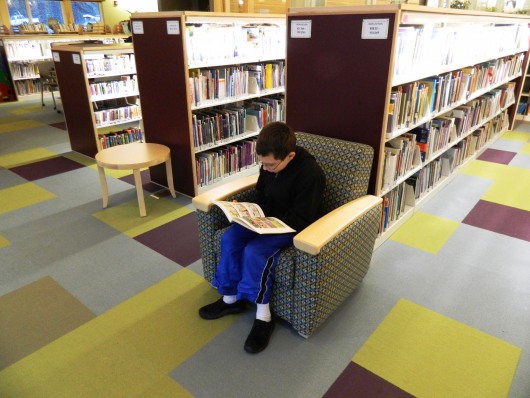 A young patron reads a book at the Ketchikan Public Library.

In a 5-1 vote Tuesday, the Ketchikan Gateway Borough Assembly approved a motion to provide about $400,000 for the borough’s share of library services.

The Ketchikan Public Library is owned by the City of Ketchikan, and the borough has helped fund that library for many years through a non-areawide property tax charged to residents outside of city limits.

For the past several years, some Borough Assembly members have questioned the value of library funding. During its Aug. 22 meeting, the Assembly voted to stop that payment, but that decision was reconsidered and brought back on Tuesday for another vote.

The Assembly’s meeting chambers were packed, and when Children’s Librarian Amanda Kiely asked those in the audience who support library funding to stand up, the vast majority rose.

George Pasley, the outreach librarian, spoke specifically to the services his position provides. He brings books and library materials to people who are physically incapable of coming to the library themselves. That includes seniors at the Pioneers Home and Long Term Care, people who can’t leave their homes, and people in the hospital.

Pasley gave one poignant example of a woman who had been hospitalized by a judge’s order.

He said she called him and asked him for some books.

“So, I took her the books that she asked for, which happened to be hymnals,” he said. “The nurses came and said, ‘How did you get here.’ I said, ‘Well, she had a phone. She called the library and I came.’ And they said, ‘Well, this is the first time she stopped screaming since she came in.’”

In all, 10 people spoke during public comment, urging the Assembly to approve library funding. No citizens spoke against the library appropriation.

The only Assembly member who spoke against it was John Harrington. Speaking telephonically, he said the borough faces diminishing state funding, and unless the state Legislature figures out a budget solution:

“Things are going to get worse, this next year,” he said. “The vetoes will get deeper. Somehow, somewhere, sometime, we are going to have to start taking a look at the budget or plan on raising the taxes.”

Harrington proposed reducing the library appropriation by $40,000, but that amendment received no second and died. Harrington was the sole vote against the main motion.

Assembly Member Mike Painter, who has voted against library funding in the past, was absent.

The Assembly also voted 5-1 to establish Oct. 8 as a sales tax holiday in the borough. The Ketchikan City Council also approved a similar measure. That day is the first Saturday following the Oct. 6 distribution of this year’s Permanent Fund Dividends.

Chelsea Goucher spoke during public comment in support of the sales tax holiday.

“People are super encouraged by sales tax holidays,” she said. “It’s almost a mental thing. People are more excited by that than maybe a sale that might be a lot more than the tax percentage. So, people love it. Business owners love it. And it does lead to more sales throughout the year once people get out and see what is available in town.”

Assembly Member Glen Thompson was the only vote against the motion.

The Assembly spent a long time talking about the state Department of Education and Early Development’s decision last month to reject the Ketchikan School District budget.

DEED officials disagreed with the borough’s inclusion of certain in-kind services as part of the local contribution to school funding. Borough Manager Dan Bockhorst asked for direction from the Assembly, and recommended that the borough formally object to the state agency’s decision.

After much discussion, the Assembly decided to direct Bockhorst to sign off – under protest — on an adjusted school district budget. 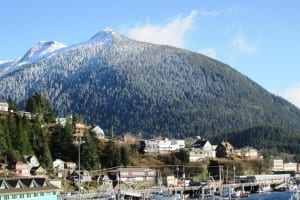 At the end of the meeting, the topic of Deer Mountain came up. The Alaska Mental Health Trust board last month voted to start the process of a timber sale on Deer Mountain by Jan. 15, unless Congress approves a land trade for other Southeast timberland.

Assembly Member Bill Rotecki suggested that the community negotiate with Mental Health to develop a Plan B.

“The feedback is that they would actually prefer to be bought out of the land, rather than an easement on the timber,” he said. “But I’d like to request that the manager to continue to develop a dialogue so if it turns out there isn’t action on the part of Congress that we have an opportunity to engage.”

Rotecki said the value of the timber has been estimated at about $2 million, so be believes the land would be worth quite a bit more.