City looks at how to dock bigger cruise ships 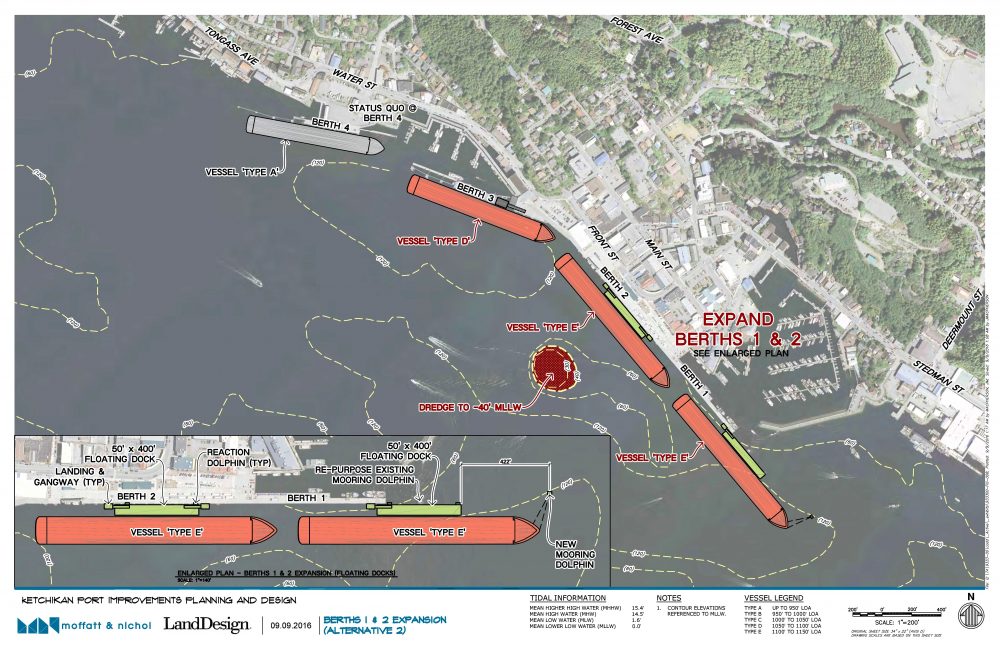 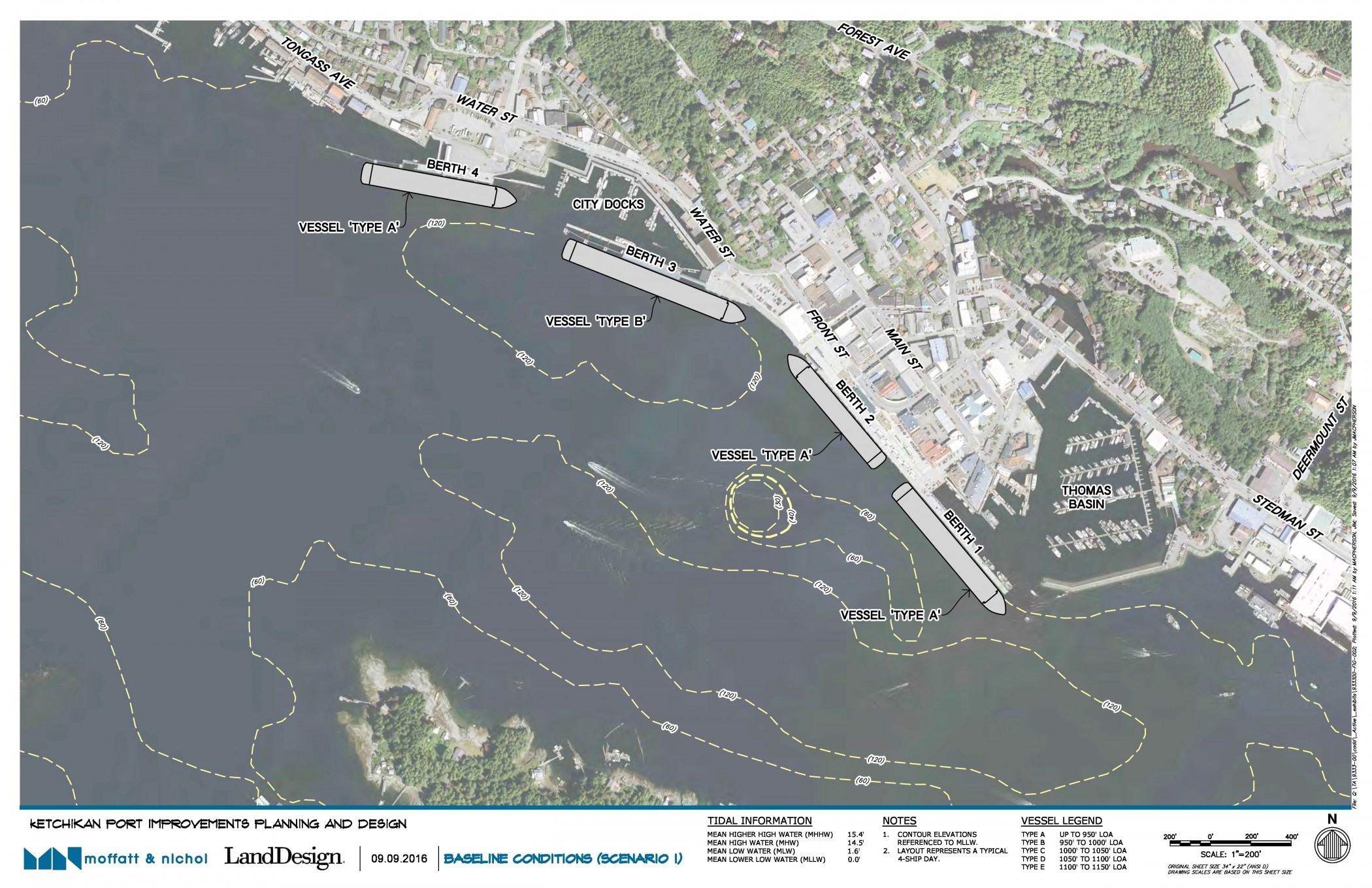 How should Ketchikan’s downtown dock look in the next few years, as the city responds to larger and larger ships? That’s the main question up for discussion during a special public-input meeting set for this Wednesday.

For cruise ships, that is, especially when the market is about to introduce a bunch of ships that are bigger than your port can handle.

Ketchikan has four cruise ship berths, each able to dock one Panamax-size vessel.  Those have been the standard for a while, and they’re pretty big. The Coral Princess, for example, is 965 feet long and carries a couple thousand passengers, plus about 900 crew members.

A post-Panamax ship – the kind we’re going to start seeing more of in Alaska in the next few years — reaches more than a thousand feet in length, and can carry up to 3,500 passengers.

Citing the importance of the cruise industry to the City of Ketchikan, officials are making plans now about how to accommodate those big ships. The city hired a firm to inspect the current facilities and conduct a market study.

Port and Harbors Director Steve Corporon said the study indicates that bigger ships soon will start replacing Panamax ships as those older ships are phased out.

The challenges these bigger ships pose are their size, of course, but also the number of people they carry.

“A good rule of thumb: We try to have at least one gangway available for every 1,000 passengers,” he said. “So, when these ships have 3,000 passengers, which many of these newer, bigger ships do, if we can’t get a third gangway, it really bottles things up.”

And if passengers can’t get off the ships in a timely manner, they have less time to take tours, shop and experience Ketchikan. 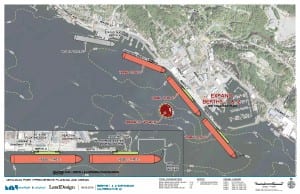 Options for changing the dock include lengthening the Berth 3 floating barge, extending Berth 1, and adding floating docks to Berths 1 and 2. (Image courtesy City of Ketchikan Port and Harbors Department)

Corporon said the post-Panamax ships also are designed for areas with much smaller tide changes than Alaska, so Ketchikan’s fixed facilities at Berths 1 and 2 can be problematic.

He said the contractor, Moffett and Nichols, has come up with some design concepts for the city to start preparing the port for bigger ships.

“There’s some viable options for tweaking what we currently have to better accommodate the envisioned, larger ships,” he said.

For example, at Berth 3, they could simply extend the floating barge. Berths 1 and 2 are a little more complicated, because they are fixed in place with not much room to expand. Corporon said proposals include extending Berth 1 toward the mooring dolphin that’s just south of the dock, and adding some floating barges in front of those berths. Those aren’t perfect solutions, though.

“It would have some impacts on the entrance to Thomas Basin,” he said. “That’s been a hot-button issue in the past. We want to talk about that, talk about what the minimum clearances, openings should be. If we do have to put another dolphin out there, what should we do to make sure that it serves people well?”

And that, Corporon said, is why public input on those designs is so important.

The contractors are looking at uplands improvements, too, because bigger ships will bring

more passengers. The city also is investigating the possibility of dredging a shallower section of the Tongass Narrows between Pennock Island and the dock. Corporon said that section has been challenging for some cruise ships to steer around.

“Probably not going to be cheap,” he said. “We want to see what those numbers are going to be. It’s not just going to be a matter of going out and dredging a bunch of silt and gravel. It’s probably going to be some heavy-duty rock work.”

Speaking of not cheap, the dock reconfiguration cost is not yet firm. But, Corporon said, initial general estimates put it at about $10-$15 million per berth.

“That’s obviously not money we have right now,” he said. “But there’s options. Once we get these projects kinda scoped out, we can start seeking some funding.”

State cruise passenger head taxes are one potential funding source. Corporon said that’s where the money came from for the Berths 1 and 2 rehabilitation. Berth 3 was completed with port bonds. And, Corporon stressed, money to pay off port debts comes directly from the cruise lines, through Ketchikan’s local head tax and other port fees.

But, that’s still a lot of money to spend. What if we don’t do anything? Can the ships still tie up?

“If we don’t do anything now, eventually we’re going to reach a point where we can’t handle four ships at once,” he said. “We’re going to be able to handle maybe three ships at once and (have) one anchoring out, just like we did 10-15 years ago. So, that’s why we’re trying to be ahead of the game, and prevent that.”

Because a ship anchored out would mean fewer passengers taking the trouble to come ashore, and that would mean a hit to the local economy.

There will be two public input meetings on Wednesday to accommodate different schedules. The first is 3-5 p.m., and the second is 6-8 p.m. Both meetings will take place in City Council chambers, and will include a power-point presentation and images of design options.

You can find more images of design options on the Port’s website.