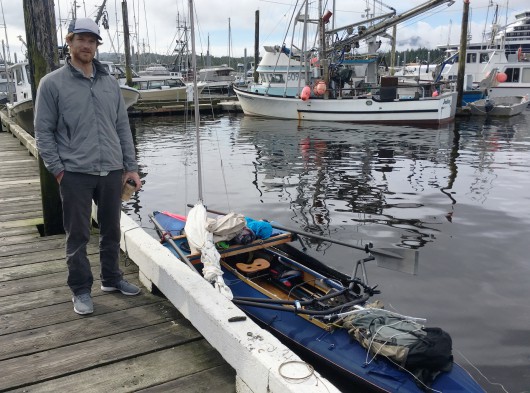 John Taussig kayaked to Ketchikan from Bellingham, Wash., to raise awareness and funds for multiple myeloma. (Photo by Leila Kheiry.

For the past six weeks, give or take a few days, a California man rowed his converted kayak up the Inside Passage from Bellingham, Wash., to Ketchikan, raising awareness and funds for multiple myeloma, a cancer of the blood that affects his family in a deeply personal way.

John Taussig’s decision to solo-paddle to Alaska was sort of accidental. His mother, a breast cancer survivor, was diagnosed about a year ago with multiple myeloma.

Anyone who has battled cancer, or is close to someone who has been through it, knows the treatment can be brutal. Taussig said his mother had radiation therapy and a serious regimen of medication to qualify for stem cell therapy.

“During the course of this, we were bouncing around an email that, ‘Oh, we should do a fundraiser.’ We were thinking about relays – fun stuff. I mentioned I would row up to Alaska. It was something I’d never done before. I’d never rowed before at all, much less any distance. And, then I had a couple donations and basically had to do it.”

Taussig isn’t a stranger to the sea, though. He grew up sailing, and lives on a sailboat in Santa Cruz, Calif.

So, it makes sense that he added a sail to his 40-year-old foldable kayak. He also attached a couple makeshift outriggers for stability – made from broken surfboards he found at a garage sale – and strapped a toddler’s camping cot to the deck to hold his gear.

And then Taussig dropped a sliding rowing seat into the kayak, so he could row his way up

the coast. He said when he first started training for this adventure, he figured out traditional kayak paddling wasn’t for him.

“I couldn’t go more than an hour without having my legs fall asleep and pain in my back. In fact I had an X-ray in April on my back – I wasn’t sure if it was a work injury, if I’d slipped a disk. They said, ‘No, you look pretty good.’”

So, it was all the sitting that caused the pain. With a sliding rowing seat, Taussig said, he’s not just sitting the whole time; he’s using his legs and back in addition to his arms and core.

“I didn’t have one minute of pain, in fact I feel better now, today, than when I left for the trip.”

The only downside was facing backwards the entire trip, which started at the Bellingham ferry terminal on August 8th. The first part of the trip was great. Taussig said the weather was warm and sunny, not too breezy, and then he got to Nanaimo, on Vancouver Island, B.C., and the wind kept him there four days.

“I would leave the harbor and get blown right back to Newcastle and Protection Island. At that time, people were saying this could last for a month; you may never make it out of here.”

But he did it. It took 14 hours to get through barely 10 miles, but he did it. And once he got through that rough patch, the wind was a little more cooperative. 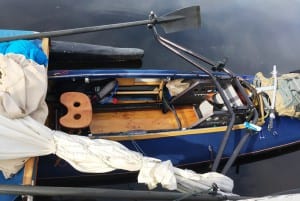 John Taussig dropped this sliding rowing seat into his kayak, and rowed instead of paddled up the Inside Passage. (Photo by Leila Kheiry)

Taussig said he loved experiencing how quiet life is when traveling through largely unpopulated areas. There also were multiple wildlife encounters, but one sticks in his mind because it was amazing and frightening.

It was a gray, rainy day; his boat was holding a lot of water and sitting kinda low; and two dorsal fins popped up about 40 yards away. Then two more on his other side. Then 10 more about 10 yards behind.

“And then they all encroached upon me and I was in the middle of this pod. Being four inches off the water in a boat that was pretty much sinking at the time – or at least swamped. I was really intimidated. I will say that I slithered just a little bit lower in the kayak.”

Taussig said one of the killer whales kept rushing the boat, then diving at the last second.

After about half an hour, they finally swam off. Taussig said he was just starting to process what happened when

“A giant humpback comes, boosh! Right next to the boat. Huge. Huge humpback – two, maybe even three of them. It was so close to me and I was in such open water. I was overwhelmed.”

Taussig said he saw dozens of humpbacks – although most weren’t that close – many other orcas, sea lions, etc. He also encountered a whole lot of great people.

“I didn’t even realize this would be the cornerstone of the trip, but I was able to have just the most fantastic experiences with Canadians and some Americans that I met along the way who were insistent on being so helpful. Everything on the boat broke at least once, some things broke more than once or bent, needed repairs. I got so incredibly lucky with the people I met along the way.”

At various stops, Taussig said, those helpful people fed him, let him use their showers, warmed him up, fixed his boat, repaired his sail and donated to his cause.

Taussig was able to raise more than $20,000 for the International Myeloma Foundation, which funds research into the disease and supports families affected by multiple myeloma.

He said he’s amazed at the response to his efforts.

“When I first got five donation, I was almost brought to tears. And now there’s – I checked this morning—there’s a 120-something different donors.”

The organization lets the fundraiser decide where the money raised will go. Taussig is not sure yet where he’ll allocate the money. He said it’s up to his mother and his uncle – who also has multiple myeloma – to determine what they think would be most helpful.

“My mother, she was a cancer researcher at one time, and she’s really interested in individualized patient treatment options, so there’s a couple different studies that are going on that the grant could go toward.”

Taussig said his mother is doing well after a stem cell transplant, although she’ll probably always have the disease. But, he said, cancer research is moving forward quickly, and he believes cures will be discovered in his lifetime.

“I can’t wait to see these things disappear. (Cancer) is so evil and there’s so many different types and I just want them to go away.”

With determination and plenty of research, maybe they will.

Here are links to John Taussig’s journey blog, and to his page with the International Myeloma Foundation.