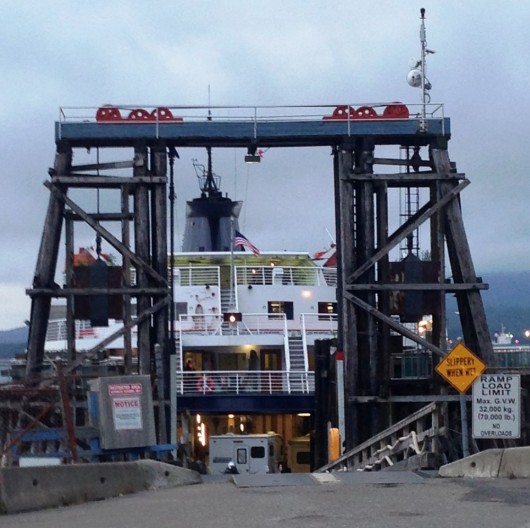 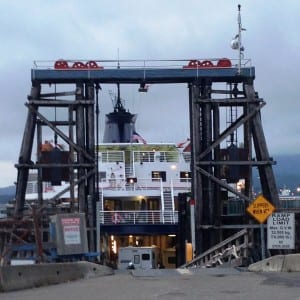 The AMHS ferry Taku loads up at the Prince Rupert, B.C., terminal in 2014.  (Ed Schoenfeld/CoastAlaska News)

The Alaska Marine Highway System on Tuesday released a proposed schedule for next summer.

Ferry system spokesman Jeremy Woodrow said it doesn’t show much of a decline compared to summer 2016. But, he said, the system will see about 10 fewer operating weeks through the 2017 winter schedule.

“The total operating weeks currently is 335 and next summer’s schedule plus the following winter would be about 325,” he said.

Woodrow said those 10 weeks can easily be absorbed, “so just maybe a week less for a boat here and there throughout the season.”

Most vessels will be following the same routes. The Fairweather, the marine highway’s remaining operational fast ferry, would continue providing service to Sitka and Juneau once a week, allowing the LeConte to call at smaller communities more often.

“Angoon, Gustavus, Tenakee and Pelican and Hoonah, those communities get a little bit more opportunity to get that vessel one more day a week,” Woodrow said.

Both vessels also will sail to Haines and Skagway.

The Columbia will continue sailing from Bellingham to Skagway, and the Kennicott will remain on the Bellingham-cross-gulf route.

Woodrow said the marine highway worked with the state to build a schedule based on the expected funding level for the next fiscal year. He said the ferry system does not have an exact figure.

The Taku, which the state plans to sell, and the Chenega will remain in long-term storage. The Malaspina also will be tied up.

Written comments on the schedule can be submitted through Oct. 24. A public hearing is set for Oct. 27th at the Ketchikan office at 10 a.m. for Southeast. Those who can’t attend in person can call in.