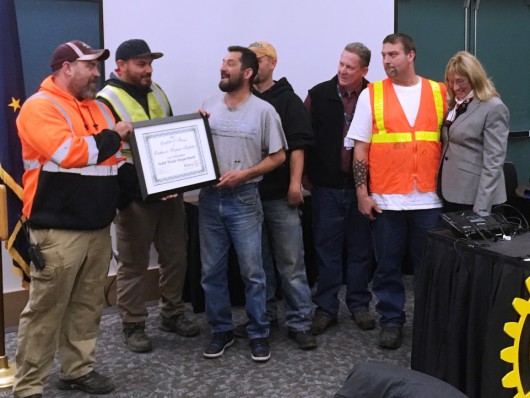 During a lunchtime event co-hosted Wednesday by the Ketchikan Chamber of Commerce and local Rotary clubs, three service awards were handed out.

The first award went to City of Ketchikan garbage collection crews, recognized for Excellence in Customer Satisfaction. Before handing over the framed certificate, Rotarian

Rosie Roppell read aloud from the nomination, which had been submitted by Judy Zenge.

“Many of us have witnessed these guys dragging the cans to the curb for the elderly neighbor and dragging them back, and taking the time to say hello, and helping kids across the street and helping us get around them in traffic,” she read. “Yet, we sometimes forget to show our appreciation. So I, Judy Zenge, would like to nominate Brian Gilson, Sean Griffin, Mark Hoyt, Larry Karels, Dan McKelvy, Timothy Morgan, (Koma) Paiva, Arthur Williams, Stacy Wood and their supervisor, Lenny Neeley.” 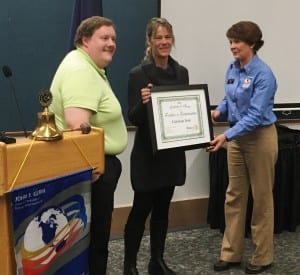 Tricia Pearson of Fish from Trish (center) received the Excellence in Entrepreneurism award during the joint Chamber/Rotary lunch. (Photo by Leila Kheiry)

The second award was the Excellence in Entrepreneurism Award. Rotarian Stuart Whyte read from the nomination that he had submitted, noting that the business has been generous when donating to local nonprofit organizations.

“And driving by their storefront, I can only assume that business must be (doing) well, because one moment they’re over here, then … they’re down the street in a larger space,” he said. “This speaks to their positive customer relationships and their reinvestment into improving their business, continuing to provide quality products and a great customer experience. So, I have the honor of nominating and presenting the excellence in entrepreneurism award to Trisha Pearson, Fish from Trish.”

In the interest of full disclosure, we should note that Whyte is KRBD’s development director.

The final award was the annual Innovation Award, which went to Vigor Alaska. Rotary 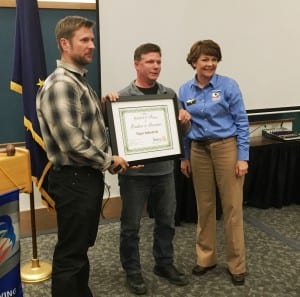 District Governor Michelle O’Brien read from the nomination that she submitted for Vigor, which operates the state-owned Ketchikan Shipyard.

O’Brien said Vigor has been innovative in many ways, but particularly in its treatment of and attitude toward its employees. She noted its reputation as a “second-chance” employer.

“Vigor has never used criminal background as a job disqualifier, with the exception of specific federal safety-sensitive jobs that may require this,” she said. “Vigor aggressively cultivates every hiring edge, including offering weekly group support meetings for those who have personal issues, such as previous addictions.  The program is lauded by employees from all parts of Vigor as one that has changed their lives for the better and taught them the value of not only their work, but themselves.”

Sen. Bert Stedman also spoke during Wednesday’s event. He talked about the state economy and the upcoming Nov. 8 general election. We’ll have a later story focusing on his remarks.