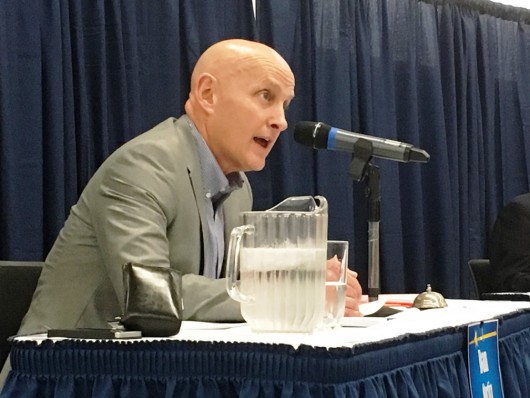 Incumbent Rep. Dan Ortiz is the unofficial winner of the House District 36 race.

With all 10 precincts reporting in just after 11 p.m. Tuesday, Ortiz had a little more than 52 percent of the vote. Republican challenger Bob Sivertsen had just over 42 percent, and Constitution Party candidate Ken Shaw drew about 5 percent.

Ortiz said he’s honored to be the apparent choice of House District 36 voters, but said he won’t celebrate fully until all the ballots are counted. He credits a positive message for his apparent win, along with a focus on what he was able to accomplish his first term.

“But then, I also talked about what still needed to be done and I think the voters recognize that the Legislature in the past session didn’t get it done, some of the tough work that we needed to get done, and I think that their votes were a vote of support that I can be one of the guys that can help bring about some solutions,” he said. 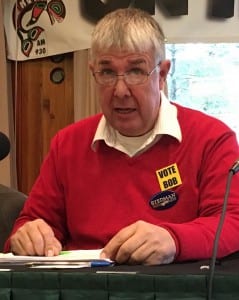 Ortiz, who is unaffiliated with a party, caucused with the minority Democrats during the last session, but has said during this campaign that he expected to be part of a bipartisan majority if he won re-election. Sivertsen questioned that during the campaign, arguing that Republicans have held the majority for many years.

Ortiz said Tuesday night that a bipartisan majority was looking likely. He noted that the race in Juneau appears to be going to the Democratic challenger, along with a couple of Anchorage races.

This particular campaign was notable for the district because of the influx of outside money, flowing from Anchorage and Washington, D.C. Those funds primarily went to a PAC formed to support Sivertsen, and paid for attack ads against Ortiz. 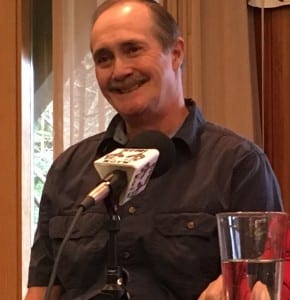 Constitution Party candidate Kenneth Shaw is a caretaker at Orton Ranch and homeschools his children. (Photo by Leila Kheiry)

Ortiz said this part of the state doesn’t respond well to negative campaigning.

“Southeast Alaska is different in that we try to keep things civil and try to keep things more about the positives of a particular candidate rather than the negatives of the opponent,” he said. “Hopefully, that message will carry through.”

The Alaska Division of Elections doesn’t provide a precinct breakdown until Wednesday, at the earliest. The total, districtwide numbers reported for each candidate are: Ortiz: 3,171; Sivertsen, 2,564; and Shaw, 314.

Those numbers don’t include absentee ballots.