Front half of Alaska Class ferry Tazlina rolls out 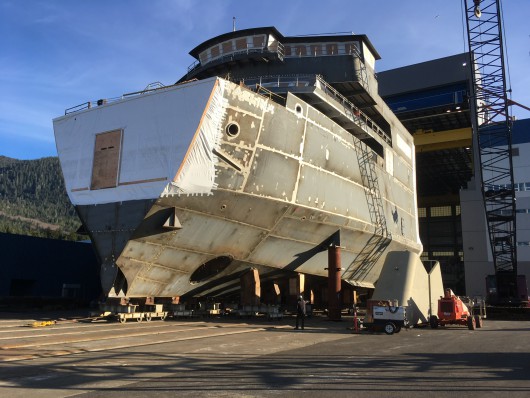 The forward half of the Alaska Class Ferry Tazlina moved out of the assembly hall at the Vigor Alaska shipyard in Ketchikan. (Photo by Leila Kheiry)

Ketchikan’s Vigor Industrial rolled out the forward half of the Alaska Class Ferry Tazlina on Sunday. With that 800-ton portion out of the assembly hall, shipyard employees now can get started on the back half.

It takes coordination and planning to move 800 tons of half-built ferry, even when it’s moving just a couple hundred feet.

On a frosty, windy, blue-sky Southeast Alaska morning, a handful of Ketchikan Shipyard employees kept a close eye on the huge chunk of welded steel as it inched out of its tight quarters in the assembly hall, and into the light of day.

The ferry isn’t done. Not by a long shot. But this is an important moment for the shipyard, which received the $100-million state contract to build two Alaska Class ferries in fall of 2014.

Here’s Doug Ward, director of shipyard development, summarizing what just happened while we warmed up with hot coffee indoors: “Today, the marine division rolled out the forward half of the state ferry Tazlina into its berth 1 position. The very next thing that will happen inside the building is the engine-room modules that we’ve been working on for the last several months, those will go into the assembly hall and we’ll start building units and stacking modules for the aft half of the Tazlina.” 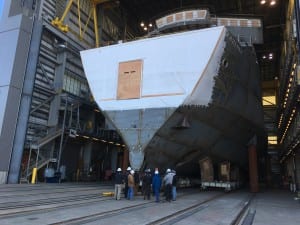 Vigor Alaska crew members confer before moving the forward half of the Alaska Class Ferry Tazlina out of the assembly hall at the Ketchikan shipyard. (Photo by Leila Kheiry)

The forward half was made water-tight with fitted plywood to keep out Ketchikan’s typical wet weather, and finishing work will continue inside that section while the aft half is assembled.

Dockmaster Greg Howe said once the back end is complete, they’ll roll it out and weld the two together.

“The second half of the ship will actually go quite a bit quicker because a considerable part of the aft of the ship is already constructed,” he said. “It’s sitting in modules in other parts of the yard. And will be assembled in the assembly hall here over the next eight months. We should be rolling the aft half out early-summer, mid-summer.”

The Tazlina is the first Alaska Class ferry, and because of that is taking the longest. With this first ship, Vigor employees had to work on detailed designs, fabricate tools and templates, and work out any kinks in the plans.

The second ferry – the Hubbard – should go faster. Other than the name, Ward said the ships will be pretty much identical.

“So, when we start on 2, on the Hubbard, we will have that learning curve,” Ward said.

Howe added that the shipyard’s young workforce has been in training, and by the time they start on the Hubbard, those workers will have more experience to work faster.

Alan Coffin is the project manager, and was all smiles as the forward half of the ferry rolled out of the hall. Back in the office, he said it was exhilarating, and it’ll be even better when they roll out the other end.

“But this is a huge accomplishment,” he said. “You see how big that thing is coming out of the shop? 150-ton cranes, 100-feet in the air and we’re just clearing those with that ship. So, it’s a huge accomplishment. I mean, sit back and look: We’re doing that here in little-old Ketchikan, here. It’s crazy. It’s really crazy.”

The Alaska Class Ferries contract calls for final delivery by late 2018. The Tazlina should be in the water for sea trials by fall of next year.

The Ketchikan Shipyard is owned by the state, but is managed by Vigor Industrial.