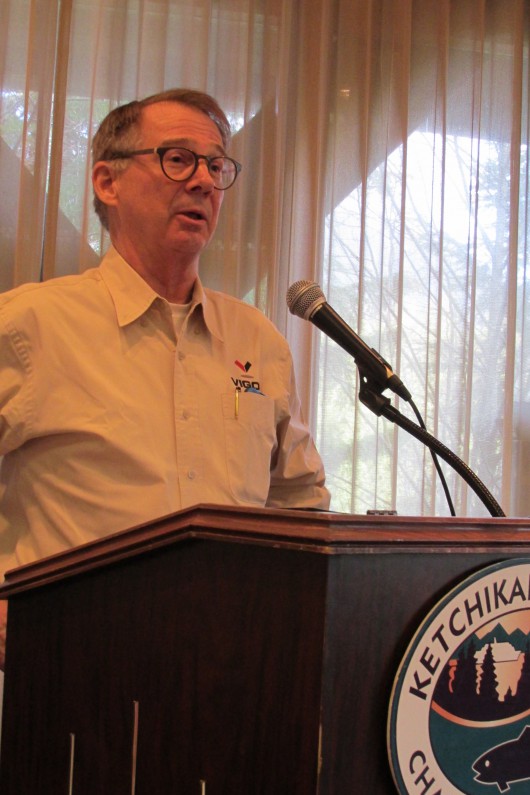 The Ketchikan Marine Industry Council supports growth and expansion of Ketchikan’s marine economy. Doug Ward, Director of Shipyard Development at Vigor Industrial, is one of the group’s founders. He gave an update on KMIC at Wednesday’s Ketchikan Chamber of Commerce luncheon.

In 2006, Ward was appointed to the Alaska Workforce Investment Board by then –Gov. Frank Murkowski.  One of the board’s tasks is to identify priority industries for the state.  Ward says maritime was not included at that time. He says he tried to get that industry recognized for several years, but was not successful. That gave him the idea to start an organization focusing on growing and expanding Ketchikan’s maritime economy.

KMIC started in 2012 with funds from marine industry donors and the Ketchikan Gateway Borough.

“What we did in 2012 was to begin to analyze Ketchikan’s marine businesses and see what the marine sector really looked like. We found 212 businesses in Ketchikan that were either solely maritime or had a maritime component to its business line.”

Ward says the state recognized the work KMIC was doing and moved forward with its own efforts. In 2014, the University of Alaska published a maritime workforce development plan.

“And that was the first formal document that I’ve ever seen in the State of Alaska that has ‘maritime’ right on the front of it. And it went through and analyzed all of the marine industries.”

Ward says those include transportation, fishing, shipbuilding and repair, and fish processing. He says later that same year, the State Department of Commerce published a document looking at trends and opportunities in Alaska’s marine industrial support sector.

Ward says these two efforts provided key documentation, and helped move maritime forward as a priority. He says the Workforce Investment Board has since moved away from focusing on priority industries to industry sector partnerships.

Alaska’s identification as a maritime state is a big win, Ward says, and he feels Alaska can benefit economically by focusing on this industry. He says KMIC also worked with local government to get Ketchikan recognized as a Coast Guard city.

“That might not seem like too much, but it was quite a big deal for the Coast Guard. And there are only 13 designated Coast Guard Cities in the nation. Guess where three of them exist? The First State. I know we call it the 49th…Kodiak, Sitka and Ketchikan now.”

He says this not only local and state, but national attention. Ward is optimistic about Ketchikan’s economic future.

“As the First City, Ketchikan has continued to innovate and rebound from economic misfortune. And I think we still, particularly in this fiscal climate, have one of the healthiest local economies in the state.”