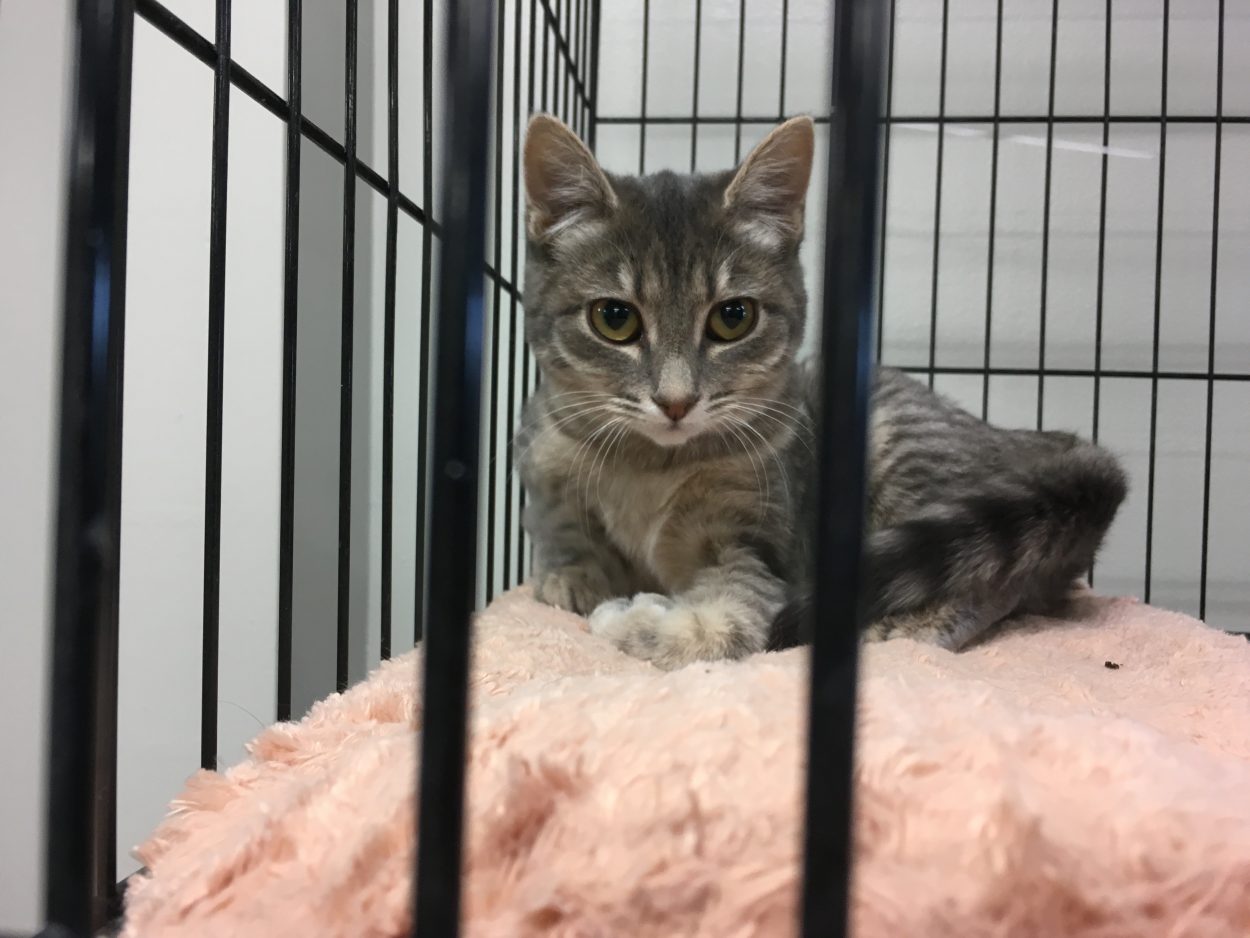 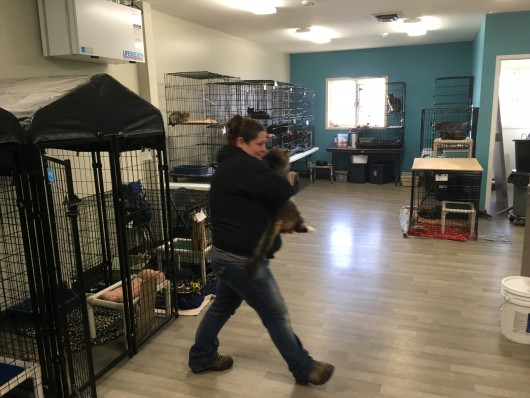 An animal shelter employee takes a cat to an exam room in the upstairs cat area of the shelter, which is undergoing interior renovations. (Photo by Leila Kheiry)

Ketchikan’s Pat Wise Animal Shelter has been going through some slow but steady changes for about six months. The end is now in sight for interior renovations.

It’s quiet upstairs at the Pat Wise Animal Shelter. Cats and kittens hang out in their cages; most are happy to take time from their naps to rub their faces against an outstretched hand.

The relative silence is a huge improvement. For many years, cats and dogs were housed in the same space downstairs – dogs in kennels lining the walls, cats caged in the center. That proximity was less than ideal for both species.

Eddie Blackwood is director of the borough’s Animal Protection Department. 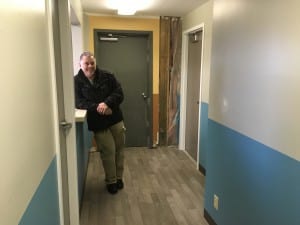 Animal Protection Director Eddie Blackwood stands in the expanded entryway of the shelter, which is in the middle of an interior renovation. (Photo by Leila Kheiry)

“The primary concern before we started this renovation was to find a separate space for cats, away from the dogs,” he said. “To relieve the stress on the cats and the dogs.”

The building’s upstairs had mostly been used to store archived documents, but the borough found another place for those, which nearly doubled the space available for shelter operations and provided that all-important separate cat area.

“It would also give us an opportunity to have a room for feral cats, it would give us an opportunity to have an isolation unit for sick cats, and also an impound room for cats,” he said. “So, we’re really covering all our bases with regards to our cat population. And also with the dogs, we’ve got an area where the dogs can be in main viewing, we’ve got a small isolation area and a quarantine area. So, as far as management of the population goes, it’s enhanced all the way around.”

“We contracted out electrical and mechanical, but all the other work was done in-house, and we’ve got one guy doing all the work,” he said. 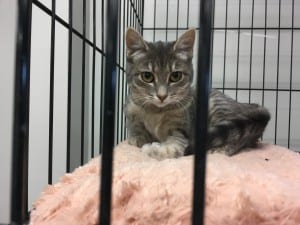 A cat rests in its cage in the upstairs cat area of the Ketchikan animal shelter. (Photo by Leila Kheiry)

“Eddie’s needs kind of turned into a full-building renovation,” he said. “It’s never been renovated since it was constructed in the early ‘80s, so it was past due.”

One of the biggest structural changes to the shelter is a new interior staircase. Before, you had to go outside and climb an exposed metal staircase on the side of the building.

The upstairs has a room designated for feral cats, a special exam room for when the veterinarian visits, and a space for quarantined cats that doubles as Blackwood’s office.

“After we worked everything out, Eddie was out a desk and an office space, so that’s fine,” Blackwood said. “I’ll just hang out with the cats. But it works well, and it gives us the extra space we need for the animals.”

Blackwood said when the interior renovation is complete, they’re going to look into new, larger cat kennels in the main viewing area.

“It allows for people who want to spend time with the cats to actually go in with the cat,” he said.

They also hope to improve the dog kennels, or maybe purchase new ones, if the budget allows. 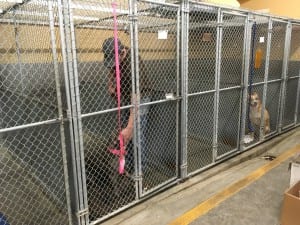 Interior renovations in the shelter’s downstairs dog area are not quite done. (Photo by Leila Kheiry)

Downstairs, just three dogs sit in separate kennels, looking out hopefully at everyone passing by. Renovation work is still ongoing there, but the shelter eventually will have special dog quarantine areas, and, they hope, a space for the visiting veterinarian.

Downstairs also is the main entrance to the shelter, and is where the public restroom is located. Peura says for that area, the borough focused on improving accessibility.

“The layout of the restroom has changed to accommodate the ADA lavatory and toilet,” he said. “This wall here — we had to create more space in here — so we moved this wall farther out, and now we’re at full compliance with turning radius for wheelchairs in here. Out in the hallway, the existing hallway used to be the same width all the way to the door,” but, for ADA compliance, they expanded the width near the entryway to provide space for turning.

Because the work was done in-house, Peura said the borough was able to save a lot of

“We kind of estimated that if we were to bid this project out to a contractor who then would hire his subcontractors, it probably would have been twice,” he said.

It took longer, but the borough didn’t have to move out while work progressed. Shelter staff just worked around the construction, and Blackwood said that wasn’t a problem.

The overall project is expected to come in close to the budgeted $190,500 for the interior renovation. Exterior work will begin in mid-January.