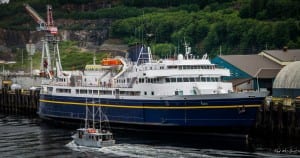 Spokesman Jeremy Woodrow said that came as no surprise to ferry schedulers.

“The proposed FY18 budget that was released by Gov. Walker reflects the ferry schedule that was proposed and issued and is up for reservations currently,” he said. “So the passengers and customers can expect to see ferry service unaltered through the summer season.”

When Walker released his spending plan on Thursday, he began a months-long process of

legislative debate. Final budget numbers won’t be known until the end of the session.

“Those changes would likely be reflected in next winter’s ferry schedule or the following summer’s schedule, which does contain part of fiscal year 2018 in it,” he said.

Woodrow said those jobs were assigned to the ferries Taku and Chenega, which are no longer being used.

“Most of those are unfilled,” he said. “There’s a few of them where there’s actually positions staying. But there’s enough vacancies currently within the fleet for people to move into different positions on other ships.”

The marine highway operates nine ferries serving 35 communities in the Southeast, Gulf of Alaska and Southwest parts of the state. That doesn’t include the two ships taken out of service.