The Ketchikan Gateway Borough Assembly covered a lot of ground Monday. Members voted against reconsidering an earlier vote to reject a contract with a Down South collections agency; extended a loan agreement with OceansAlaska; introduced a change to the borough’s ethics code; and honored retiring Borough Manager Dan Bockhorst.

The five-year contract with Professional Credit Services was voted down during the last meeting after concerns were raised about the commission rate, how different bidders had been scored and the lack of a local-bidder preference.

Assembly Member Judith McQuerry argued that borough staff carefully followed the established criteria when scoring the bidders, and until the Assembly changes those criteria, the borough should honor the process.

“As I said at the last meeting: When I looked over the criteria, it was very, very clear that the staff had very carefully considered a lot of different parameters and Professional Credit Services was the – that was the winner,” she said. “Until we have some clearer way of directing staff, I think we need to uphold their judgment.”

Most other Assembly members, however, argued that it wouldn’t hurt to delay a contract award until after the Assembly has discussed the issue during a January policy session. The motion to reconsider failed 3-4, with McQuerry and Assembly Members John Harrington and Mike Painter voting in favor.

The Assembly unanimously approved introducing an ordinance to amend the borough’s ethics code. Proposed new provisions would require Assembly members and other voting officials to declare a conflict in matters that affect the financial interests of a group, such as a nonprofit organization, that the member is closely involved with; and when there is “divided loyalty” –when there’s no monetary interest, but a strong sense of personal loyalty that could affect a member’s ability to act in the borough’s best interest.

The ordinance will come back for a public hearing and second vote during the Assembly’s Jan. 3 meeting. 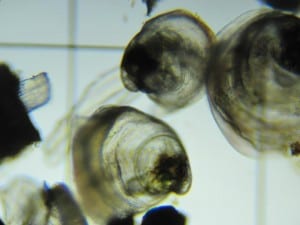 Changes to the OceansAlaska loan agreement are meant to help the shellfish seed producer qualify for a bridge loan from Alaska Growth Capital. It also extends the term of the borough’s loan to 25 years, and extends the period of zero interest on that $600,000 loan for the first 10 years.

OceansAlaska board member Bill Rotecki told the Assembly that the organization experienced some delays in starting production, which set them back on their goals. He said there also were some water-chemistry issues that have now been addressed.

Assembly Member Glen Thompson noted that if OceansAlaska doesn’t succeed, the borough will never get paid back at all.

“If they go bankrupt, it goes into bankruptcy proceedings and it’ll get auctioned off,” he said. “It’ll be pennies on the dollar, and we are not – we’re already not covered on that. We’re already into it. This does no harm to us in my mind. It’s to our benefit to try to see these guys succeed if we can, and if this is what they need for that to possibly happen: In for a penny, in for a pound.”

The motion passed 5-1 with Assembly Member Painter voting no.

The Assembly also unanimously approved a resolution honoring Ketchikan Gateway Borough Manager Dan Bockhorst, who will retire at the end of the month after a little more than nine years with the borough.

Assembly members took turns reading the resolution’s many complimentary statements, and then gave Bockhorst a round of applause and a standing ovation.

Borough Mayor David Landis recalled that he was on the Assembly that hired Bockhorst, and Landis says he never regretted that choice.

“In fact, it’s been my recurring thought that: How did we luck out getting a guy this well qualified, this committed, and this tireless in his work for this organization?” he said. “I’ve really not only come to rely on you but respect you more and more, and have come to know you as a friend.”

Bockhorst thanked the Assembly, and reminded them that he took the job in order to live in Ketchikan. He says he and his wife plan to remain in the community.

Also Monday, the Assembly heard a presentation from Rep. Dan Ortiz on the upcoming legislative session. We’ll have more on that discussion later this week.