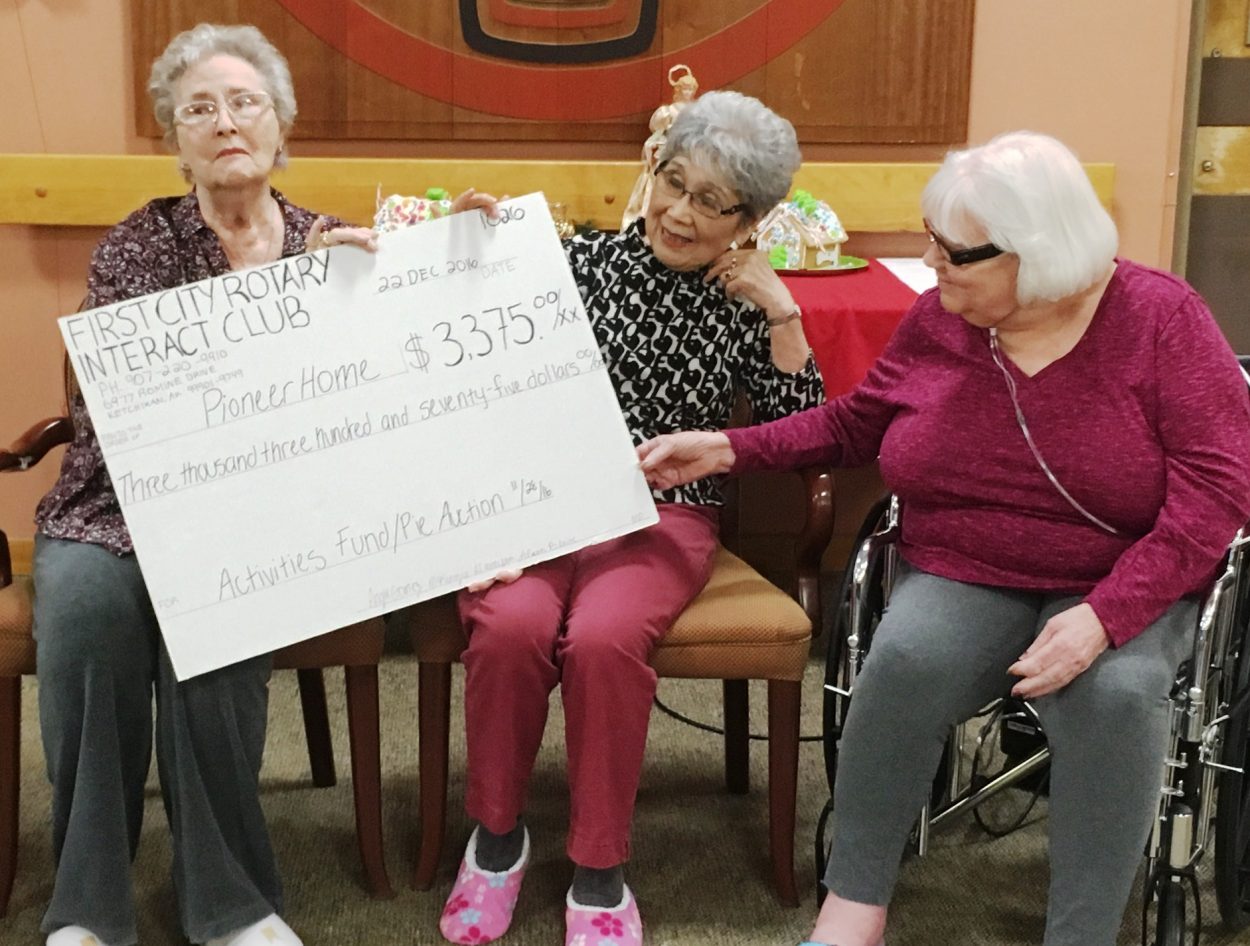 Every November, just before Thanksgiving, Ketchikan High School’s Rotary Interact club – the high school version of Rotary – organizes a pie auction. Money from the auction goes to the Ketchikan Pioneers Home, and usually the students are able to raise a couple thousand dollars.

This year, they raised the most money ever. In a special ceremony on Thursday, three graduating seniors from Interact handed over a check for Pioneers Home seniors.

Kayhi Interact co-presidents Angie Gomez and McKenzie Harrison, and past-president Alison Blair were all smiles as they presented a gift-wrapped big check – suitable for photos – to members of Ketchikan Pioneers Home’s resident council. 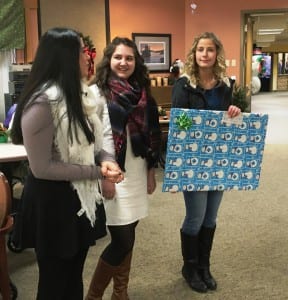 The residents, too, smiled as they unwrapped the early Christmas present. The big check – and the normal-sized official check – was for $3,375. Gomez said they raised that much because they had so many pies donated to the auction by Ketchikan’s generous bakers.

“I don’t even know how many pies we had – there was a lot,” she said. “We had more than we’ve ever had this year, which was great.”

The money will go into the resident council’s activities fund. Pioneers Home activities director Hilary Koch said that helps pay for all kinds of things that aren’t funded through the ever-shrinking state budget: Holiday decorations, for example, and bingo prizes.

“All kinds of supplies,” she said. “Newspaper and coffee supplies – a newspaper subscription. Cat food – we do have a cat, we have two birds, we have probably seven fish – nail polish and spa supplies,” and arts and craft supplies, even furniture.

Koch said the pie sale and the annual Pioneers Home garage sale are two big sources for that fund, along with individual donations from people in the community.

After the brief ceremony, Gomez, Harrison and Blair gave a few more details on the pie auction. They said Marna Cessnun’s pies raised the most money, as they do most years. 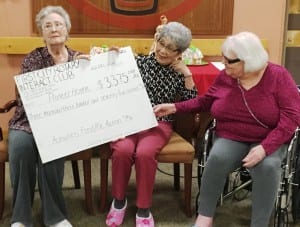 Harrison said Dick Miller’s pies also went for more than $200 apiece. Those also were classic cherry and apple. In fact, there were a lot of apple pies, and they sold well. But, she said, “We also had some rhubarb pies, cherry, pecan.”

“Lots of apple, though,” Gomez said.

“There was a freezer one – a s’mores pie,” Harrison added.

Gomez said, “We had some cheesecakes too.”

“Another surprising seller, you could call her and ask her to make a certain type of pie, so it was an empty pie dish,” Harrison said. “That was a good seller. It ended up being an apple, though.”

Getting hungry? Let’s talk about something else, then. Like TAFCOM. That’s a non-profit organization in Tanzania. Here’s Gomez, explaining how Kayhi’s Interact helps that group: “There’s different groups in TAFCOM – there’s the education one and we mostly fundraise for the education: Schools and supplies and whatever they need for their schools.”

To do that, Gomez said, women in the Tanzanian villages make various items, such as scarves and bags. Interact sells those items here in Ketchikan, and then sends that money to TAFCOM for specific projects.

“We just recently sent them $1,500 because they need to furnish a school that they haven’t furnished yet, so that’s going to desks and school supplies and whatever else they need,” she said.

Blair said helping others is part of why she has enjoyed her four years with Interact.

“I like giving back to both the community I’ve grown up in and also our global projects we do, especially in Tanzania,” she said. “It’s just an amazing feeling you get when you help others.”

“The activities that we do – the pie auction is one of my favorites – the Winter Arts Faire just gets you in the feeling for the holidays, TAFCOM is an amazing organization,” she said. “Just being able to say what we do and how it affects people; it’s really just great.”

Harrison said she feels blessed to be able to help others, and she appreciates the ongoing community support of Interact’s efforts.

“I would like to thank everyone who donates money, time and pies, also with buying the items,” she said. “I know sometimes it’s kinda the same items every year but people still tend to support us and we’re very grateful for our community’s help.”

This is the last year of Interact for the three seniors, which made the pie auction’s success somewhat bittersweet.

There is a college version of Rotary called Rotaract, which they say they might try to organize if their colleges of choice don’t have one already.