British Columbia will clean up mine near Juneau 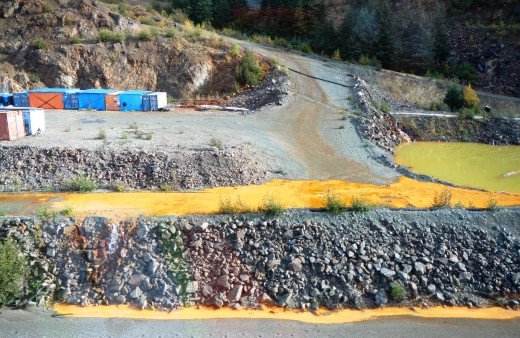 A Tulsequah Chief Mine settling pond overflows at the site about 40 miles northeast of Juneau Sept. 26, 2016. (Photo courtesy of British Columbia Ministry of Energy and Mines)

Canadian officials say they’ll stop polluted mine water from entering a salmon-rich river that flows into Southeast Alaska near Juneau. The work could include plugging up tunnels from British Columbia’s decades-old Tulsequah Chief Mine.

The Tulsequah Chief hasn’t operated since 1957. Two companies tried to reopen it during the past 20 years, but both failed.

That’s left a legacy of acidic water carrying pollutants into the Tulsequah River. It’s a tributary of the Taku River, a key source of salmon caught in Southeast Alaska.

Provincial officials had ordered the latest developer, Chieftain Metals, to clean up the site. After the company went bankrupt last fall, British Columbia sent inspectors to see what had been done. But it wasn’t much.

“They were not able before freeze-up to do anything about the settling pond that exists beside the river that captures the runoff from the hill that the old mine was built into,” he said. 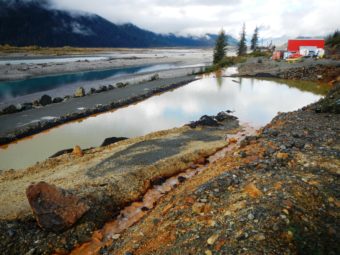 A Tulsequah Chief Mine settling pond overflows at the site about 40 miles northeast of Juneau Sept. 26, 2016. (Photo Courtesy of British Columbia Ministry of Energy and Mines)

He said experts will look into plugging leaking mine tunnels to stop the discharges into the pond, which leaks into the river.

If that’s not practical, he said they’ll look at other options.

“Even though the water that’s been tested by both Alaska and British Columbia has shown no negative impacts on aquatic organisms, it’s still against our rules for that water to be flowing into the Tulsequah River. So, one way or the other, we have to stop it,” he said.

“I think there is actually some good news here and a change from past practices,” said Chris Zimmer, Alaska campaign director for the group Rivers Without Borders.

He said the studies Bennett mentioned were faulty and inconclusive. And he’s been calling for a cleanup for years.

“In the past, B.C. was simply saying we’re going to let the mining companies come in, develop the mine and clean it up. I think now Minister Bennett realizes that after two bankruptcies that this mine isn’t one that will be developed and B.C.’s now going to have to responsibility for the cleanup,” he said.

B.C. acknowledges a new company could take over the Tulsequah Chief. It’s in the hands of a Canadian firm that would like to recoup some of its investments. It could do that by selling the mine.

But Bennett said such a developer would have to meet tighter standards.

“We would need an ironclad commitment from any new buyer that they were going to do what’s necessary immediately. And if we can’t get that, then the government would act on the closure and remediation plan and just simply close the site down,” he said.

That’s what transboundary mine activists, including Zimmer, want. But he said it’s not as easy as it sounds.

“Plugging up the mine to stop the movement of water is one thing. You could do that relatively cheaply and quickly. But the problem is eventually you’ll have cracks, water will start moving and you’ll be back to the acid-mine drainage situation where you would need a water-treatment plant,” he said.

And that would be costly.

Chieftain did set up such a plant for a while, but determined it was too expensive to run without the mine opening and generating income.