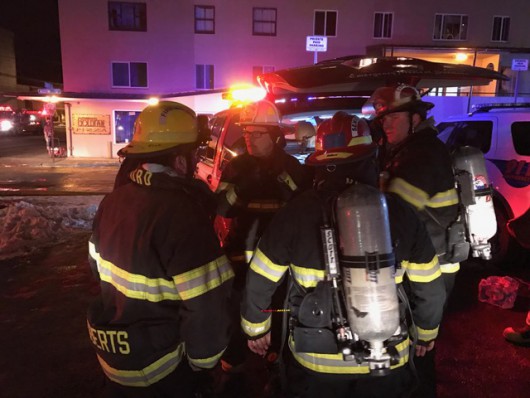 A 49-year-old Ketchikan man was found dead late Tuesday after an apartment fire on the 11th floor of the Tongass Towers condominiums building.

According to the Ketchikan Fire Department, firefighters were dispatched to the Tongass Avenue high-rise a little after 11 p.m. Tuesday after a report of an automatic fire alarm.

The building’s sprinkler system had activated, and first responders saw light smoke and water when they arrived at the 11th floor. Firefighters entered the affected apartment, and found two people inside. One was unharmed, but the second person, Weston Scott Davis, was pronounced dead at the scene. 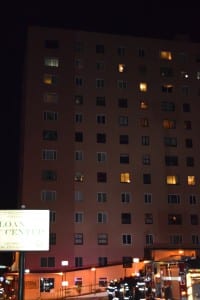 According to the fire department, Davis had been in the room where the fire started. But, Fire Chief Abner Hoage says it’s unclear whether Davis died because of the fire. The victim’s body has been sent to the State Medical Examiner to determine cause of death.

“Because what we can’t tell from our investigation is: Was the fire the result of the death, or was the death the cause of the fire?” he said. “So once they do their cause-of-death determination, then we’ll know which one happened first.”

The Ketchikan Fire Marshal determined the cause of fire to be smoking materials. But, Hoage says, Davis may have died while smoking, thus causing the fire; or died after the fire started from smoke inhalation.

There were no smoke detectors in the apartment, but the building’s fire sprinkler system contained the fire to the one room. Hoage says there still was an active fire when responders arrived.

“The intent of a sprinkler system is to keep it to a room it started in, and that’s exactly what it did,” he said. “But, they’re in a fixed position. They can’t get under objects and inside objects and move things around. So, there was still was some fire but it was largely contained by the sprinkler system, and then lots of smoke.”

“Sprinkler systems will stop a fire once it’s started, but they’re not a life-safety device,” he said. “What’s going to save your life is having a working smoke detector in every bedroom and on every floor of your home, that’s checked at least once a month. And if it’s not a 10-year-battery in the detector, then you need to change the batteries once a year.”