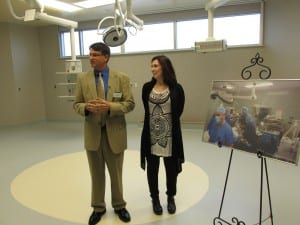 The Ketchikan City Council agreed Thursday to move forward with some recommended modifications to the new hospital surgery suite, at a cost of about a million dollars.

The modifications are the result of code changes that happened after the design work had been completed. City Manager Karl Amylon told the Council that even with the modifications, the project will be within budget.

Some Council members questioned why the design wasn’t modified before the surgery suite was constructed. Here’s Council Member Mark Flora, who started out quoting a memo from Amylon on the topic.

“‘The modifications agreed to by PeaceHealth and city staff are the result of various factors, including code revisions that occurred after the design was completed; improvements in technology making what was designed and installed out of date in terms of best practices,’” he read. “This is something that the public should know going forward as we vote on this. How do we build a new hospital and put obsolete stuff in it before we occupy it?”

Amylon says he understands the concerns of the Council, but at this point, the building

needs to be completed so PeaceHealth can move into the surgery suite.

The hospital is owned by the City of Ketchikan; PeaceHealth is the service provider. In his memo, Amylon writes that PeaceHealth will pay for some other identified modifications to the surgery suite.

The motion passed 5-1 with Council Member Janalee Gage voting no. The new total cost to the city of the Phase 1 hospital expansion is about $53 million.

Also Thursday, the Council chose to send the issue of community agency grants back to the committee, rather than increase the appropriation as recommended by that committee.

The original appropriation was $380,000. The committee wanted about $20,000 more to fully fund grants to 17 local nonprofit groups. 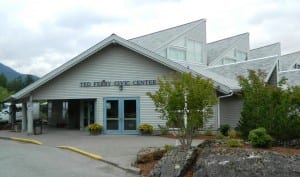 The Ted Ferry Civic Center is owned and operated by the City of Ketchikan. (KRBD file photo)

While it wasn’t on the agenda for this meeting, the topic of shuttles for events at the Ted Ferry Civic Center came up. Council Member Dave Kiffer, who was absent during the last meeting, says he was disappointed with the Council’s Jan. 19th decision to not fund a shuttle for this weekend’s Wearable Art Show.

Kiffer said the Council seems to “suffer from a severe case of institutional amnesia.”

He said the city chose to build its civic center at the top of a steep hill, on a site that has inadequate parking. The funicular, or tram, that is owned and operated by Cape Fox Lodge, helped alleviate the parking issues. But, Kiffer said, now the tram is old and needs repairs.

“So, the way I see it, we have three options here, folks: We can tear down the building and put it somewhere else. We don’t want to do that – that’s tens of millions of dollars we don’t want to spend. We can do what the company that runs the funicular wants us to do and give them a huge chunk of money to fix the thing or build a new one for several hundred thousand dollars plus. Or we can provide a couple thousand dollars now and again so the buses run up there. It doesn’t seem like it’s that hard of a decision,” he said.

Council Member Judy Zenge, who voted at the last meeting to not fund a shuttle bus to the Wearable Art Show, responded that Kiffer made some good points. She asked that the issue come back to the Council for discussion.