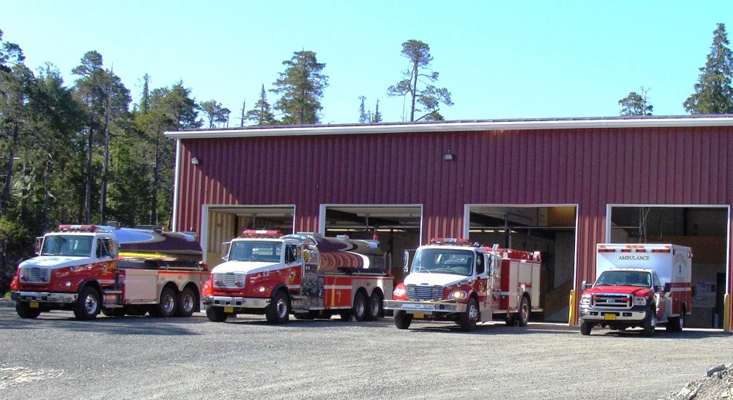 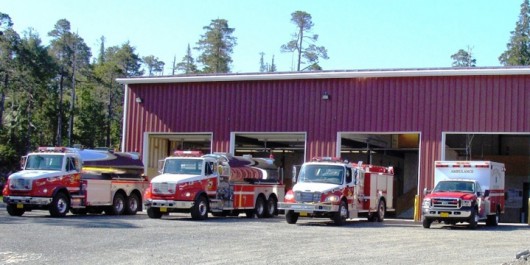 Engines, an ambulance and a tanker truck sit outside at the North Tongass Fire Station. (Ketchikan Gateway Borough photo)

Property-owners north of Ketchikan city limits will not change the way they pay for firefighting. That issue and others came before the Ketchikan Gateway Borough Assembly Monday night.

The proposal came from the board representing what’s called the North Tongass Service Area.

It wanted to change a $100-a-year structure fee into a $100-a-year property fee. Advocates said that, and a small property tax reduction, would more fairly spread responsibility for fire department funding.

But the assembly voted 4-2 against advancing the plan. Borough Manager Ruben Duran said similar proposals have come up before.

“The overall sense of it was, this wasn’t a better fix. The first fix of the $100 fee for properties with structures wasn’t any better fix and the proposed fix was also unsatisfying,” Duran said.

About 1,800 properties are in the affected area and some are exempt from taxation.

Borough Mayor David Landis said what happens next is up to the board that proposed the idea.

“That was headed for a public hearing, if it had passed. But it did not pass, so we’ll see if the North Tongass Service Area Board wants to retool that and bring it back,” Landis said.

Firefighting in the South Tongass Service Area is funded by property taxes alone.

In other action, the Borough Assembly approved a resolution asking the governor and Legislature to exempt the Ketchikan Shipyard from property taxes.

Landis said it used to be exempted by state tax assessors because it’s owned by the Alaska Industrial Development and Export Authority. But that changed.

“We’ve exempted it locally. So that leaves a problem with the required local contribution for schools. That is basically an unfunded amount, as a result of that increased property assessment,” Landis said.

The larger the borough assessment, the more the state expects it to chip in for schools. The Ketchikan Shipyard is operated by Vigor Alaska, part of a larger company.

The assembly also heard a request for borough support for expanding The Manor, a privately-owned assisted-living home. Representatives said help with a down payment for a new building would help it get state housing loans.

Borough Manager Duran said the idea came up during public comments and did not include a formal proposal.

He said borough staff might be able to help the developers find other sources of money.