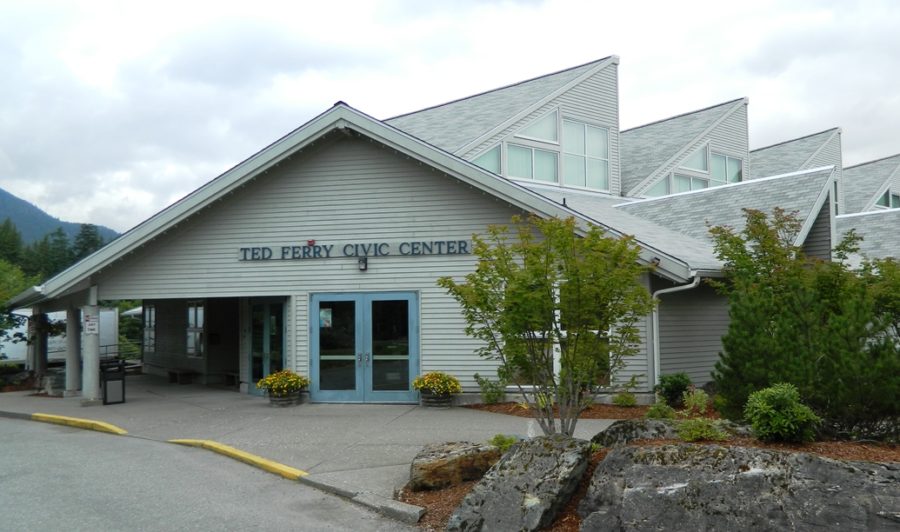 The Ketchikan City Council Thursday night discussed bus transportation and parking problems at the Ted Ferry Civic Center.  At its January 19th meeting, the Council denied a request by the Ketchikan Area Arts and Humanities Council to provide $1,350 to fund a shuttle between downtown and the Ted Ferry Civic Center, for the 2017 Wearable Art Show.  Councilmember Dave Kiffer was not at that meeting. At the Council’s February 2nd meeting, Kiffer commented that he did not agree with the decision, given that it is a city facility with limited parking.  Councilmember Judy Zenge asked that the issue be revisited.

The paved lots adjacent to the Civic Center have about 150 spots according to facility manager Alice Nelson. A dirt lot, belonging to Cape Fox, is often used for overflow parking. Zenge asked if paving that lot would help. Councilmember Bob Sivertsen says the city has equipment and resources that could be used to clear the lot, and put down a gravel surface. Kiffer says that lot is full during big events and paving won’t solve the problem.

“The reality is, and I’m not faulting the Fire Department on this, but since the Fire Department two or three years ago started saying, ‘You can’t park in other spots,’ with the auxiliary lot, the main lot and even the little side lot, they’re all full. And when you add that to the fact that the tram’s not going to be running in the winter when these big events are happening, that’s the issue.”

Ted Ferry Civic Center staff provided the Council with a list of events where parking is a potential issue.  Councilmember Dick Coose says the city should improve the auxiliary lot to add parking. He says he does not support providing shuttle services.

“Most of the people, when this overloads, is a profit-making event and they should plan for it. Because if we plan for it, and we do everyone where this thing is showing up – a thousand dollars per event – and I saw at least 20 to 30 events. So that’s another…you do the numbers.”

Councilmember Janalee Gage says most people do plan, and when the tram is working, they park downtown and take the funicular up the hill.

Mayor Lew Williams III says he feels the city could help with the Winter Arts Fair and Wearable Arts Show.

Kiffer says most events are not an issue.

After much discussion, the Council directed City Manager Karl Amylon to discuss the possibility of improving the dirt lot with Cape Fox, and to do a cost comparison of lot improvement versus providing bus service.

Also Thursday night, the Council discussed whether to impose a city cigarette excise tax. Voters, in last October’s municipal election, approved a $2 per pack excise task that also includes a 50 percent wholesale tax on e-cigarettes and other tobacco products. The tax applies to products purchased in both the City and Borough, but all taxes collected would go to the Borough. Gage expressed frustration.

“These might be fighting words but I’m really tired of the us-against-them game of cat-and-mouse with the Borough.”

“That $3 amount is the golden egg of getting the numbers to drop in use (by) teenagers, and for cancer numbers.”

Councilmember Julie Isom says the City and Borough Cooperative Relations Committee plans to discuss amending the distribution of cigarette excise tax revenue at its next meeting. The Council gave four hands direction to delay action until after that meeting.

The Council also voted unanimously not to award a contract to Pool Engineering for Hole-in-the-Wall breakwater upgrades.  Several councilmembers and the city manager acknowledged that the proposal the Council created was not clear. Amylon was directed to prepare a new proposal with suggested specifications for the Council to consider at its March 2nd meeting.

The Council also discussed a three-year contract with Directory Publishing Solutions for publication of the Ketchikan Telephone Directory. Isom questioned, in the digital age,  spending about $200,000 a year for a phonebook. She also says, as a business owner, she has had bad experiences with DPS.

“I’ve spoken to DPS advertising reps, and I believe them to be highly unethical…In my opinion.

Isom says the company makes it difficult to cancel service. She says she and other business owners have complained.

Kim Simpson, Sales, Marketing and Customer Service Manager for KPU, says there were problems will previous Yellow Page companies, but she was unaware of problems with DPS. She says fake companies often contact businesses, and that has happened in the past. Simpson says she will look into the issue.

Simpson says DPS was the sole bidder. The Council voted to approve the contract.

In other business, the Council considered an ordinance allowing paid performances on the docks during the cruise ship season.  Coose proposed an amendment setting a sunset date of November 1, 2017. He says it could be reapproved next year, but wanted to see if the program is successful. The amended motion passed unanimously.

The Council also unanimously approved appropriation of more than $380,400 for community agency grants.

The Council also held two executive sessions. The first regarded survey and title issues with the Ketchikan Medical Center Expansion Project. The second session was to discuss the case Walter Reichard v. City of Ketchikan, et. al. Reichard is suing the city and police for $4.5 million on allegations of a false arrest made in 2014. The Council gave management direction for both, but took no further action Thursday night.

The next regularly scheduled meeting of the Council is on March 2nd.